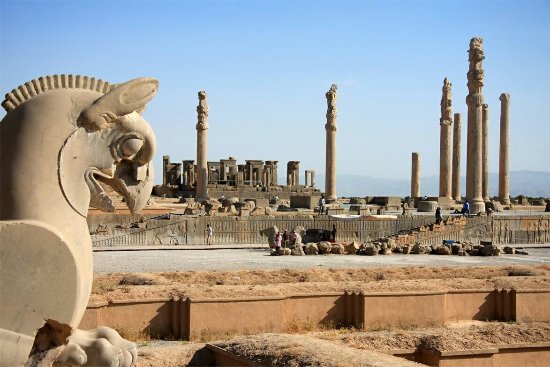 The Persian Empire is the name given to a set of regimes centered in modern-day Iran that traversed several centuries—roughly from the 550BCE to the 1200 CE. The first Persian Empire, established by Cyrus the Great around 550 BCE, became one of the largest and longest empires in history, stretching from Europe’s Balkan Peninsula in the West to Modern Day Kabul in the East. This Iron Age administration, sometimes called the Achaemenid Empire, was a hub of religion, culture, art, science, and technology for more than 200 years before it fell to the invading armies of Alexander the Great.

Impressive Empire, isn’t it? Even Mohammad Reza Shah, the last Shah of Iran, thought so. What did he do about it? On the 2500th Anniversary of the Persian Empire, he decided to give a party that was never before seen on this planet. This ‘grandest stage of them a” consisted of an imposing set of celebrations that took place on 12–16 October 1971 to commemorate the anniversary of the establishment of the Imperial State of Iran and the Persian Empire by Cyrus the Great. Every King, Queen, President, and Prime Minister from all six continents were invited.

Let’s explore how this party became a reality.

The planning for the party took almost a year. With the announcement to hold the main event at Persepolis’s classical city, near Shiraz, the regional infrastructure had to be fixed, including the Shiraz International Airport and a roadway to Persepolis. While the supporting staff and press would be housed in Shiraz, the main festivities were planned for Persepolis. An elaborate tent city was designed to accommodate attendees. The area around Persepolis was cleared of poisonous snakes and other vermin. Flowers and Trees were planted, and 50,000 songbirds were imported from Europe.

Other events were programmed for Pasargadae, the Tomb of Cyrus’s site, and Tehran.

The Golden City (also called Tent City) was designed by the Parisian interior-design firm of Maison Jansen on 0.65 km2 (160 acres). They attributed to the meeting between Henry VIII of England and Francis I of France at the Field of the Cloth of Gold in 1520.

Fifty ‘tents’ (prefabricated apartments with Persian tent-cloth surrounds) were designed in a star pattern around a central fountain. Diverse trees were planted around them in the desert, to recreate how ancient Persepolis would have looked. Each tent was equipped with telex connections and direct telephones for attendees to their respective nations. The entire ceremony was televised to the globe by way of a modern satellite connection from the site.

3 days before the banquet, eighteen tons of food arrived. According to the record, this included: 2700 kg of pork, beef, and lamb—1300 kg of fowl and game. And 30 kg of caviar — although some people claim it was 150 kg. Even Peacock meat was arranged.

The large Tent of Honor was produced for the reception of the dignitaries. The Banqueting Hall was the most massive structure and measured 68 by 24 meters. The tent site was enclosed by gardens of trees and other plants flown in from France and next to Persepolis’s ruins. Catering services were presented by Maxim’s de Paris, which closed its establishment in Paris for almost two weeks to accommodate the glittering festivities. Legendary hotelier Max Blouet came out of retirement to oversee the banquet. Lanvin created the uniforms of the Imperial Household. Two hundred fifty red Mercedes-Benz 600 limousines were used to chauffeur guests from the airport and back. The dinnerware was made using Limoges porcelain and linen by Porthault.

The festivities began on 12 October 1971, when the Shahbanu and the Shah paid homage to Cyrus the Great at his tomb at Pasargadae. For the next couple of days, the Shah and his first-lady welcomed arriving guests, often right at Shiraz’s airport. On 14 October, a sensational gala dinner took place in the Banqueting Hall in commemoration of the birthday of the Shahbanu. 60 royal family members and heads of state were gathered at the single large serpentine table in the Banqueting Hall. The official toast was raised with a luxurious Dom Perignon Rosé 1959.

Six hundred esteemed guests dined over five and a half hours, making for the largest and most lavish official banquet in history as recorded in consecutive editions of the Guinness Book of World Records. A son et lumière show, the Polytope of Persepolis composed by Iannis Xenakis and followed by the specially-commissioned electronic music piece Persepolis, ended the evening. The next day marked a display of armies of various Iranian empires covering two and half millennia by over 1700 men of the Iranian armed forces, all in different costumes. In the evening, a less conventional “traditional Persian party” was held in the Banqueting Hall as the concluding event at Persepolis.

On the final day, the Shah launched the Shahyad Tower (later renamed the Azadi Tower after the Iranian Revolution) in Tehran to celebrate the event. The tower also housed a Museum of Persian History. It displayed the Cyrus Cylinder, which the Shah touted as “the first human rights charter in history.”

The cylinder was also the recognized emblem of the celebrations. The festivities ended with the Shah paying tribute to his father, Reza Shah Pahlavi, at his mausoleum.

The event brought together the rulers of two of the three oldest surviving monarchies, the Shah and Emperor Haile Selassie I of Ethiopia. His youngest brother, Prince Mikasa, represented emperor Shōwa of Japan. By the end of the 1970s era, both the Iranian and Ethiopian monarchies had ceased to exist. Good Riddance.