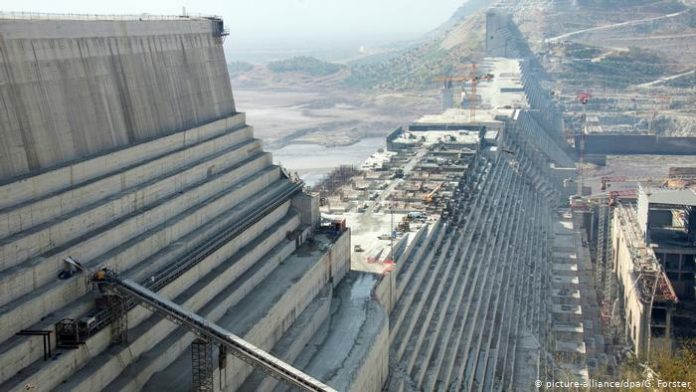 “Such an action carries negative indicators reflecting that Ethiopia has no desire to achieve a fair deal that follows the Declaration of Principles in 2015,” the Egyptian Ministry of Irrigation and Land Reclamation said in a statement on Monday.

“The water ministers of the three countries agreed in today’s meeting that the technical and legal committees would convene to discuss the points of disagreement on August 4-5.”

The ongoing meetings will only focus on the dam’s operation and the reservoir’s filling, while the future projects on the dam will be tackled later after an agreement on the filling is first concluded, NYK quoted the statement as saying.

Egypt has proposed a mechanism to run the discussions over the coming two weeks, but the results of the current meetings will be announced on Thursday, it said.

Representatives of Egypt, Sudan and Ethiopia besides the observers from the US, European Union, and experts of the African Union Commissions have been taking part in the ongoing meetings.

On July 25, Egypt stated that the first filling of the $4 billion dam wouldn’t harm Egypt’s share of the Nile resources.

However, Egypt, Sudan, and Ethiopia’s controversial points of discussion over the past 10 years have been inflamed by the Ethiopian desire to fill the reservoir in only three years while the other two countries target the filling in seven to ten years to avoid the implications of the time of severe drought.

The massive dam is expected to produce over 6,000 megawatts of electricity and become Africa’s largest hydropower dam upon completion.

Ethiopia started building the dam in 2011, while Egypt, a downstream Nile Basin country that relies on the river for its freshwater, is concerned that the dam might affect its 55.5-billion-cubic-meter annual share of the water resources.