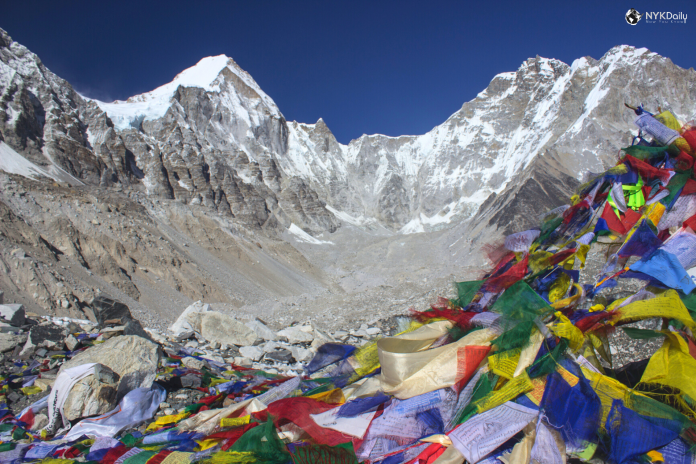 The Mount Everest Base Camp has summoned thousands of adventure enthusiasts and trekkers to uncover the majestic Himalayan peaks’ magic. For decades, people from all over the globe have walked miles and succeeded their predecessors in getting a glimpse of the picturesque view of these mystical mountain ranges and finding out what makes them so grand. The answer lies in the trip itself, for those who have left on this quest have faced their moments of truth and rediscovered themselves in a completely new way. Many say their personalities have gone through a change that has taken them past the material world and transported them to a universe full of peace, adventure, fulfilment and tranquility.

The Everest Base Camp has two principal sections, namely, the North and the South Base Camp. While the Southern Base Camp lies at an elevation of 5,363 meters in Nepal, the Northern Camp is in Tibet at the height of 5,150 meters. Mountain Climbers and trekkers have historically used these posts as acclimatization positions before climbing further up Mount Everest or while getting down after an Everest trek. ‘Sherpas’ (Nepalese guides for Mount Everest Treks) and transporters carry stocks to these camps for trekkers. These camps serve as the point where trekkers stop to get accustomed to the high elevation and peak weather. At times, these stays may be prolonged to many days, depending on how long it takes you to adjust to the height and what the climatic conditions are like.

The journey to the South Base Camp is top-rated and patronized by tens of thousands of mountaineers every year. The offset of this trek is Lukla which can be reached from Kathmandu via a flight. From Lukla, you begin your upwards trip passing different landscapes, the lovely valley of the Dudh Kosi River, Namche Bazaar and other smiling villages. In between, some stops allow you to enjoy some time in and amongst the local communities and taste Nepalese culture while gradually acclimatizing to the increasing altitudes. Slowly, you work your way to Everest Base Camp crossing Gorakshep, Dingboche, Mount Pumori, and Kala Patthar.

Visiting North Base Camp requires a license from the Chinese Government. If traveling on your own, you can arrange for the permission from reputed travel companies in Lhasa with networking. Along with the permit, you can also request vehicles, drivers, and tour guides. It’s crucial, however, to do your homework as you don’t want to learn the pitfalls of renting a car that has been poorly maintained while you are in the middle of nowhere. While there is a visitor base camp that lays halfway on the Rongbuk Monastery, the base camp is located at the Rongbuk glacier’s foot. This camp has been used since Edmund Hilary era, by trekkers as a stop before scaling the final leg up the all-powerful Mount Everest.

If you love adventure and want to explore one of the world’s most magical hiking destinations, then a walk to the Mount Everest Base Camp is the holy grail of adventure trekking. Along with some jaw-dropping mountain spectacle that will transport you to a heavenly world, you will also know how it feels to achieve something that others can only imagine! You will be packed with a feeling of accomplishment and satisfaction that is hard to match anywhere else. You will learn why travellers around the world have repeatedly returned to take the road less traveled and unravel the hilly fantasy’s riddle.