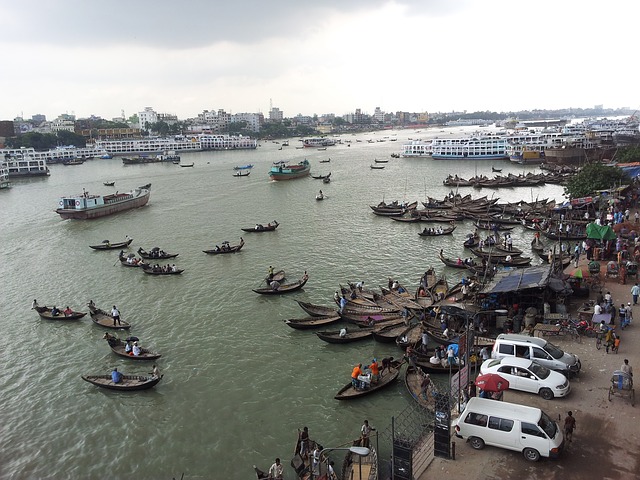 Dhaka is not a peaceful, quiet place. The city, bursting with nearly ten million people, is a gloriously loud and turbulent, sparkling enthusiasm.

It’s one place on earth that can sometimes overwhelm travelers, but once you hop into the back of one of its colorful cycle-rickshaws, Dhaka’s magic starts to unfold slowly. Life moves from the boats on the Buriganga River to its surprisingly green parks and college campuses. Mosques and Hindu temples speak of its spiritual side; British and Mughal monuments talk of its history. The restaurant scenes and flourishing art – plus the rush to construct new roads and a metro line system gives a glimpse of the future.

Places to visit in Dhaka

Buriganga River: Buriganga River is the watery artery of Dhaka and the precious lifeblood of this capital. Traversing it from the deck of a tiny boat from Sadarghat (shod-or-ghat) is to see Bangladesh at its roughest. The spectacle of the river life is enthralling.

On the foreshores, dirtied with mud and grease, you’ll find kids fishing with handmade nets in the rotting tankers’ harbor. Further out, repairers busy themselves bashing, crashing, and scrubbing ship hulls while floating on wood planks.

Ramna Park is a massive park and play area located at the heart of Dhaka. This forested park with a pond near its center is one of the most beautiful regions of Dhaka. If you want to see how Bangladeshis celebrate festivals, visit Ramna Park during mid-April. The Pahela Baishakh, Bengali New Year, is celebrated at the Ramna Park, which is turned into a picturesque and lively place each April.

The half-finished Lalbagh Fort and its well-tended fields are an excuse to skip Old Dhaka’s crowd for an hour. The fort is especially evocative in the early morning light. You can see the Mausoleum of Pari Bibi, the Diwan, and the three-domed Quilla Mosque. The only building you can get in is the Diwan, a dramatic two-story construction containing a small but beautiful museum of Mughal coins, miniature paintings, calligraphy, carpets, and firearms, and swords. In the same structure, an extensive arched doorway leads to the bathhouse.

Though it is not recommended to visit if you want to limit yourself to light and bright holidays, this museum is a valuable stop for those hoping to understand Bangladesh. Warning: displays start harmless enough but slowly becomes more graphic before ending in a room full of unique items, an extensive collection of human skulls and bones, and some alarming photos of decaying corpses with chained hands being eaten by vultures and dogs. Bangladesh was liberated from Pakistan after one of the deadliest wars of recent times. War crimes by Pakistani soldiers are shown in this museum.

Dhakeshwari Temple is the center of the Hindu worship in Bangladesh. Dhakeswari, the protector of Dhaka, an incarnation of the goddess Durga is worshipped here. Suppose you are visiting Bangladesh during the September-October season. In that case, the temple and neighboring streets throng with thousands of celebrants for Durga Puja, the goddess’ yearly festival, a uniquely vibrant, loud, and cheery time to visit.

Things to eat in Dhaka