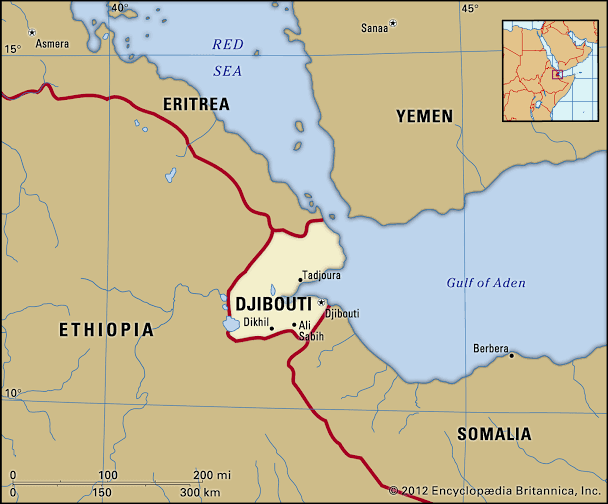 Djibouti is a small country in the Horn of Africa. Somalia borders it to the southeast, Eritrea and the Red Sea to the north and northeast, the Gulf of Aden to the east, and Ethiopia to the west and south.

Let’s look at the history of this small nation.

The Djibouti region has been populated for over 12,000 years. Pottery from below 2000 BCE have been discovered at Asa Koma, a lake area on the Gobaad Plain. The site’s ware is marked by punctate and slash geometric patterns, which resemble the Sabir culture ceramics from Ma’layba in South Arabia. Long-horned humpless cattle bones have also been identified at Asa Koma, hinting that domesticated cattle were present by around 3,500 years ago. Rock art of what seems to be antelopes and a giraffe are found at Balho and Dorra.

The oldest engravings seen to date are from the 4000 BEC in the pre-Islamic period. The most well-known is the site of Handoga, where the ruins of a village squares subcircular dry stone presented different artifacts.

An old town, Handoga is the site of many ancient buildings and ruins, many of unknown origins, including containers that can hold water, ceramic shards, drills, blades, trenchers basalt, drills, obsidian or rhyolite. A team of excavators discovered an elephant remains, which was from 1.6 million years BCC near the area.

Together with Eritrea, northern Somalia, and the Red Sea coast of Sudan, Djibouti is the most likely area of the land known to the early Egyptians as Punt (meaning “God’s Land”). The old area’s first mention dates to the 2500BCE. The Puntites were a community of people that had close relations with Early Egypt during the times of Pharaoh Sahure of the 5th dynasty and Queen Hatshepsut of the 18th dynasty.

Islam was introduced to the region early on from the Arabian peninsula, soon after the hijra. Hijra is the journey of Prophet Muhammad and his followers from Mecca to Yathrib. Zeila’s two-mihrab Masjid al-Qiblatayn dates to the 7th century and is the earliest mosque in the city. In the late ninth century, Al-Yaqubi wrote that Muslims were living along the northern Horn seaboard. He also stated that the Adal kingdom had its center in Zeila, a port city in the northwestern Awdal region, joining Djibouti.

The Ifat Sultanate was another Islamic kingdom in the Horn of Africa. Established in 1285 by the Walashma dynasty, it was centered in Zeila. Ifat built bases in Djibouti and northern Somalia, and from there extended southward to the Ahmar Mountains.

The borders of the present-day Djibouti nation-state were placed during the Scramble for Africa. Rochet d’Héricourt exploration into Shoa in 1839 marked the commencement of French interest in the Djiboutian shore of the Red Sea. Rochet d’Héricourt took the town of Tadjoura from the King Of Shewa in the mid-1800s. The dilemma was that this king was not the owner of Tadjoura. Still, a limited sultan who did not recognize the purchase contract, further travel by Henri Lambert, French Consular Agent at Aden, and Captain Fleuriot de Langle led to a bond of friendship and support between France and the sultans of Raheita, Tadjoura, and Gobaad, from whom the French finally bought the anchorage of Obock in 1862. Djibouti officially became a French territory.

After the Italian invasion and control of Ethiopia in the mid-1930s, constant border clashes transpired between Italian forces in Italian East Africa and French forces in French Somaliland. In June 1940, during the initial days of World War II, France fell, and the colony was then controlled by the pro-Axis Vichy (French) government.

Commonwealth forces and the British fought the nearby Italians during the East African Campaign. In 1941, the Italians were overwhelmed, and the Vichy forces in French Somaliland were divided. The Vichy French government maintained the colony for over a year after the Italian destruction. In reply, the British blockaded the port of Djibouti City, but it could not stop local French from presenting information on the passing ship convoys. In 1942, about 4,000 British troops invaded the city. A local battalion from French Somaliland played a big part in the Liberation of Paris in 1944.

In 1958, on the eve of Somalia’s independence in 1960, a vote was held in Djibouti to determine whether or not to join the Somali Republic or remain with France. The referendum turned out in favor of a sustained association with France, partly due to a mixed yes vote by the sizable Afar ethnic group and occupant Europeans.

There were also records of widespread vote-rigging, with the French expelling hundreds of Somalis before the election reached the polls. The bulk of those who voted no were Somalis. They were firmly in favor of joining a united Somalia as recommended by Mahmoud Harbi, Vice President of the Government Council. Harbi died in a plane crash two years later under strange circumstances.

In 1960, with the fall of the ruling Dini government, Ali Aref Bourhan, a Harbist diplomat, assumed the vice president position of the Government Council of French Somaliland, serving the UNI party. He would hold that post until 1966.

That same year, France discarded the United Nations’ proposal that it should grant French Somaliland sovereignty. In August, an official visit to the territory by then French President General Charles de Gaulle was also met with protests and rioting. In response to the demonstrations, de Gaulle ordered another referendum.

Another vote was held in the French Region of the Afars and the Issas on 8 May 1977. The previous elections were held in 1958 and 1967, which denied independence. This vote backed independence from France. A landslide 98.8% of the voters supported withdrawal from France, officially marking Djibouti’s independence.