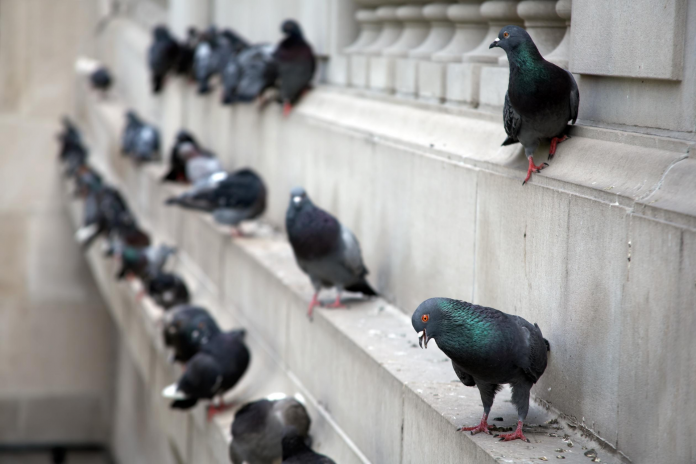 Going about your daily life in your city, you may have wondered at some point by now – what’s with all the pigeons? Lately, it seems like they’re everywhere – pecking at the ground, around garbage cans, flying from one tree to another, or even following you around all.

You might’ve thought to yourself there are more pigeons than there used to be, but that sounds like a crazy thought, right? Well, it turns out you’re not wrong! There are indeed more pigeons in urban areas. Pigeon control has become a common problem for most major cities

For many, the sight of pigeons patrolling the streets is unnatural, even after all these years. It’s got a lot to do with the fact that humans are used to seeing animals avoid them rather than seek them out, and the abundance of pigeons in urban areas has prompted many to unkindly refer to them as “rats with wings”.

But the existence of pigeons in cities goes back a lot further than you would expect. 10,000 years ago, to be precise, and to ancient Mesopotamia, where written records show that humans used food to lure the “rock dove” (a long-ago ancestor of the modern-day feral pigeon) out of the rocky areas where it naturally preferred to dwell and into human living areas.

Why? Well, the same reason people did most things back then – as a source of food. That’s right, our ancestors used to regard pigeons as quite the tasty snack back in the day, and it turns out, they were a remarkably nurturing source or protein (though obviously, you shouldn’t try to eat a pigeon now!).

As the years wore on, our ancestors understood that pigeons aren’t just a one-trick pony (well, duh!) and that they can be bred for a lot more than just eating. Indeed, pigeons are birds with a fantastically accurate sense of orientation, which made them magnificent birds to take with you on a ship.

Back in ancient times, sailors often took a cage of pigeons with them, to be released if they got lost because it was believed that the bird would point them toward land.

Pigeons were also often used as message-bearers, especially over longer distances. This meant that a lot of the birds were bred specifically for this purpose and stayed within the city, not risking getting eaten or starved, as others did.

Naturally, the birds were brought over in the late 1600s by Europeans to North America and rapidly escaped captivity. This allowed them to breed at random and it meant their numbers grew a lot faster than they would have in captivity.

The reason there are so many pigeons in urban areas, in other words, is that we made them like this. Originally cliff-dwellers, pigeons adapted and will now gladly sit atop a telephone pole, high building ledge, etc.

And thanks to their centuries living with and around humans, they’ve learned not to be afraid of us, which means we won’t be driving these winged creatures away anytime soon. Is it important to watch out for these animals though, as they can carry diseases.