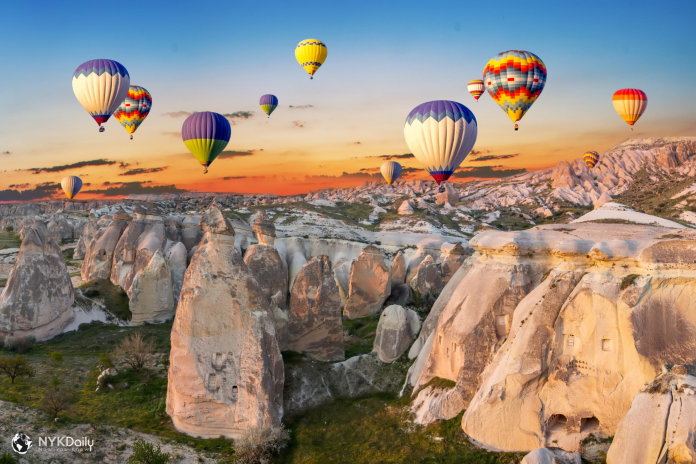 Landing in Cappadocia is like entering the Lord of the Rings movie. All around, the stones have been whisked into smooth, even curves like icing on a cake. Taking a stroll out of Goreme, the region’s epicentre, you pass by hills glowing green with tender vines. Older men and women walk on goat paths multiplied over with loads of firewood.

Beyond orchards laden in autumn, you find yourself in ranges of enormous stone toadstools overlooking a crystal sky. Cappadocia’s famous ‘fairy chimneys’ are the work of the ultimate artist: Mother Nature. Time has consumed this volcanic terrain into a puzzling moonscape, a topographical whimsy.

Civilization has followed in nature’s steps by extorting homes out of these rocky cones. Some have been renewed as luxury hotels, so book yourself a cave room and live like the early people. Walk around the channels, and you see hundreds of chapels, monasteries, and churches cut out of the stone. Clamber up a wobbly ladder to a dark entrance, step inside, and your gaze will be met by the faces of saints adorning the arches, walls, and pillars engraved by local Christians some 700-1,300 years ago.

Here are the things to do in Cappadocia

Some things to know about Traveling to Cappadocia

Autumn and Spring. Mid-April to End-May and September to October are the best times to avoid the extreme summer heat and crowds. If there’s snow in winter, the place shines and charms all the more.

What should be the duration of my visit

It would help if you visited Cappadocia for at least three days to see the main highlights or a week to lose yourself in the panorama. Some wonderful tour operators can help arrange trips if you don’t have your transport, but make sure they’re not going to take you to countless pottery and carpet shops. Make a demand for some free time to roam at will.

It’s not all about the churches. Cappadocia’s scenery makes it a perfect place for outdoor adventures, and there’s an ever-increasing amount on offer from mountain biking to trekking, white water rafting to horse riding.