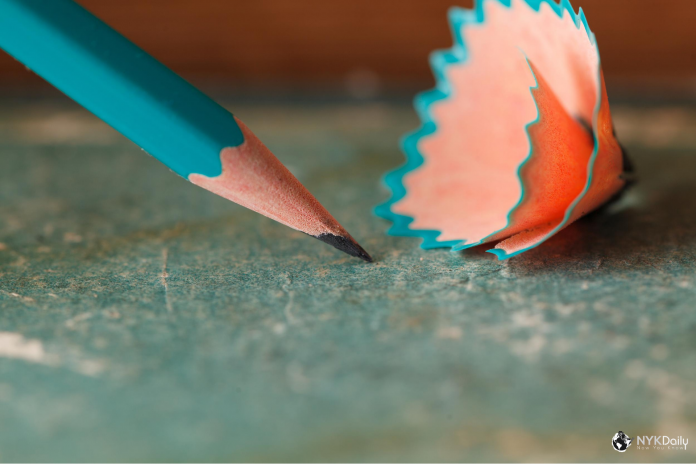 A pencil is an object for drawing or painting. It is made of a narrow, solid pigment core in a shield casing that prevents the centre from being broken and marking the user’s hand.

The history of the pencil is as old as writing itself.

Brief history before the invention of the pencil

The oldest predecessor to the pencil was a Stylus. The early Mesopotamians first used styluses to write in cuneiform. They were mostly made of reeds and had a slightly curved trapezoidal section. About 3000 BCE, the Sumerians began to use symbols marked into clay tablets to keep their accounts. The writing was inscribed on clay tablets. Scribes would take a stylus and press the figures and lines into moist, soft clay.

Stone was the primary writing material in use in ancient India. Prehistoric rock paintings have been discovered at Pachmarhi, Bhimbetka and many other Indian sites. Here the pictures, in panoramic and vivid detail, represent the day-to-day life of prehistoric humans. However, ancient Indians had another mysterious instrument to write and document knowledge. In India’s Rigveda, there is a mention of Akshara and Grandha. Akshara means the alphabet, and Grandha means book. Rigveda, composed in around 1700BCE, consists of more than 1000 hymns and 100,000 verses. It is impossible to preserve such a massive volume of knowledge unless written somewhere.

A substantial graphite deposit was discovered on the passageway to Grey Knotts from the hamlet of Seathwaite in Borrowdale parish, England. This unusual deposit of graphite was remarkably solid and pure, and it could easily be beaten into sticks. It remains the only large-scale deposit of graphite ever found in this solid form. The chemistry was in its childhood, and the substance was considered to be a form of lead. The value of graphite would soon be realized to be enormous, mainly because it could be used to line the molds for cannonballs; the mines were taken over by the kingdom and were guarded. When adequate graphite stores had been collected, the tunnels were flooded to stop theft until more was required.

The advantage of graphite for pencils was recognized as well but graphite for pencils had to be smuggled. Since graphite is delicate, it requires some form of the encasement. Graphite sticks were originally covered in sheepskin or string for stability. England would enjoy a monopoly on pencils’ production until a process of reconstituting the graphite powder was found in 1662 in Italy. However, the distinctively-square English pencils remained to be made with sticks cut from pure graphite into the 1860s. The town of Keswick, near the primary findings of block graphite, still manufactures pencils, the factory is also the place of the Cumberland Pencil Museum. The meaning of “graphite writing implement” obviously evolved late in the 16th century.

Around the mid 15th century, an Italian couple named Lyndiana and Simonio Bernacotti made what are likely the fundamental blueprints for the modern, wood-encased carpentry pencil. Their version was an oval, flat, more dense type of pencil. Their concept included the hollowing out of a branch of juniper wood. Shortly after that, a better technique was found:

Pencils from graphite powder, and clay:

The first attempt to manufacture graphite sticks from powdered graphite was in Nuremberg, Germany, in the mid 16th century. It used a blend of sulfur, graphite, and antimony.

German and England pencils were not accessible to the French during the Napoleonic Wars. France, under a naval blockade inflicted by Great Britain, was unable to ship the pure graphite sticks from the British Grey Knotts mines – the only prized source in the world. France was also unable to ship the mediocre German graphite pencil substitute. It took the efforts of an officer in Napoleon’s army to substitute this. In 1795, Nicolas-Jacques Conté devised a method of combining powdered graphite with clay and making the mixture into rods that were then ignited in a kiln. By changing the ratio of clay to graphite, the graphite rod’s hardness could also be altered. This process of manufacture, which had been earlier created by the Austrian Joseph Hardtmuth, the founder of the Koh-I-Noor in 1790, remains in use. In 1802, the composition of graphite leads from clasy, and the Koh-I-Noor company registered patent in Vienna.

Pencil with an attached Eraser:

In 1858, Hymen Lipman obtained the first patent for adding an eraser to the end of a pencil.