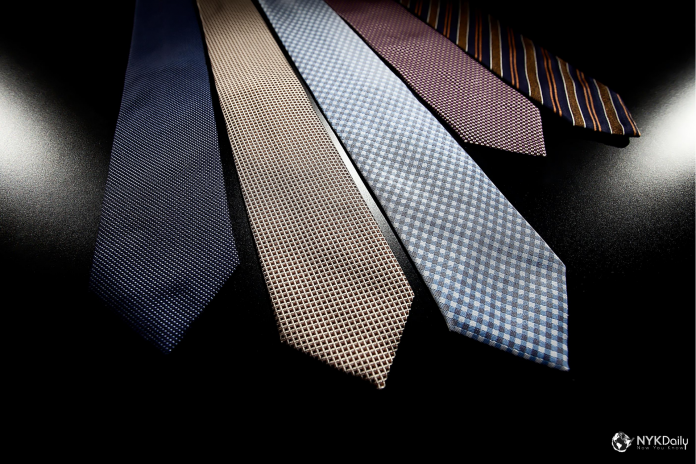 A tie can add an edge to any outfit and is suitable for a multitude of different occasions. In a corporate environment, a tie can expertly balance professionalism with style, which is often a hard balance to strike. While a tie may seem like a small addition to an outfit, it is often one of the most essential and can make you stand out amongst a crowd of people all boasting a similar attire.

It’s true. When you think about it, a tie is almost like an arrow directing the attention of anyone you meet towards your face, encouraging people to take note of your expressions. This is usually a good thing, as long as you know how to modify your facial expressions in order to make a good impression in a corporate environment. Just because a job requires you to be professional, it doesn’t mean you need to lose your friendly, endearing qualities, however. If you manage to perfect that dazzling, welcoming smile, a company tie will do the rest by encouraging people to notice this.

A person who hasn’t bothered to wear a tie, particularly within a corporate environment, can’t usually expect to command respect from their peers. Wearing a tie, particularly one that complements the rest of your outfit, shows that you’ve put thought into your appearance. That’s right; people respect those who value their look, despite what many men appear to believe.

This is in a similar vein to those who wear glasses because they think it makes them look more intelligent. A tie can give you the professional confidence you need to excel within a corporate environment. The well-known phrase, fake it till you make it, can be applied to any situation, including work. Even if you’re just starting out in a new job and are attempting to learn the ropes, a tie will allow you to feel comfortable and confident in your abilities, meaning everyone else will be too.

Nothing says, ‘I look good’ as much as a tie. As much as we want to look professional at work, it’s just as important to feel as though we look attractive. Company ties can even provide you with a slimming effect. There’s nothing wrong with wanting a self-esteem boost because as mentioned above, confidence is often the key to success.

The great thing about wearing a suit is that there isn’t much thought needed when it comes to choosing what to wear to work each day. However, nobody likes to feel like they’re wearing the exact same thing on a daily basis. A tie can eliminate this problem. For example, say you wear the same white shirt with the same black jacket for days on end. As long as you change the colour or pattern of your tie, nobody will notice. In fact, they’ll most likely respect the fact that you’ve reduced the need for excessive amounts of clothing. After all, suits can be expensive, and that money can often be better spent elsewhere.

The Effect of Social Media on Current Fashion Trends