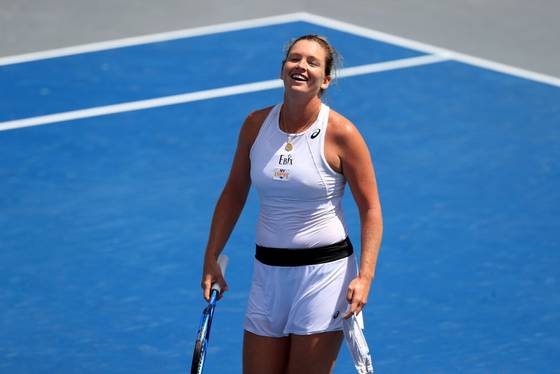 Coco Vandeweghe hammered a go-for-broke return that caught the back line to earn the New York Empire victory over the Chicago Smash on Sunday in the World Team Tennis (WTT) final that came down to a winner-takes-all last point.

The nine team, three-week WTT event at West Virginia’s Greenbrier Resort went as long as it could and a bit more.

With five sets unable to decide a champion, the contest continued into Extended Play and then a first-to-seven super tiebreak that ultimately came down to the very last point.

Tied 6-6 with Chicago’s Sloane Stevens serving for the title, Vandeweghe blasted a forehand return that was challenged but to no avail as the shot narrowly clipped the back of the baseline to give the Empire a 21-20 win.

Social distancing and other COVID-19 safety protocols were forgotten as Vandeweghe and doubles partner Nicole Melichar were mobbed by Empire team mates including Jack Sock and Belgium’s four-time Grand Slam winner Kim Clijsters, who was sidelined by an abdominal injury and did not play in the final.

“To see the best players going after it, toe-to-toe, it’s wonderful,” said Empire coach Luke Jensen. “Last year, we were one swing away, and this time the swing went in. We’re very fortunate to be in this position.”

The Empire, who lost last season’s final against the Springfield Lasers, looked motivated early on winning both the men’s and mixed doubles to take a 10-6 lead going into the singles.

Needing only to hold serve to secure the title, Canada’s Eugenie Bouchard and Bethanie Mattek-Sands were unable to shut the door on Vandeweghe and Melichar who won in a tiebreak to send the final to Extended Play.

The Empire held serve and broke the Smash to leave the score level at 20-20, sending it to a 13-point super tiebreak.

With the title slipping away the Smash went to their bench bringing in Stevens, the 2017 U.S. Open champion, in place of Bouchard to partner with Mattek-Sands.

Stevens produced some big points including an ace to level at 6-6 but could only watch as Vandeweghe’s winning shot hit the line.

“The second (Vandeweghe) hit it and I didn’t hear an ‘out’ call, I was thrilled,” Melichar said. “But then the fact (the Smash) were challenging it, all of a sudden, we were like, ‘Oh no, oh no, oh no.’

“It was just pure joy after that. It was incredible.”