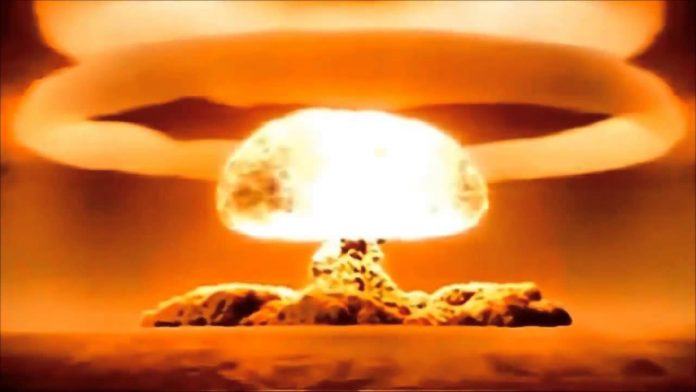 The hydrogen bomb, which carried the force of 50 million tons of conventional explosives, was detonated in a test in October 1961, 4,000 metres over the remote Novaya Zemlya archipelago above the Arctic Circle.

The footage shows an immense fireball and a 60-km high mushroom cloud rising after the explosion lit up the sky. The views were captured from several angles by cameras installed on the ground and on board two Soviet aircraft.

“The testing of an exceptionally powerful hydrogen load … confirmed that the Soviet Union is in possession of a thermo-nuclear weapon with power of 50 megatons, 100 megatons and more,” a narrator tells the audience.

The documentary was published online for the first time by Russian state nuclear agency Rosatom last week as part of events to mark 75th anniversary of Russia’s atomic industry.

Developed between 1956 and 1961 as the Soviet Union engaged in a nuclear arms race with the United States, the Tsar Bomba – the King of Bombs – was the largest hydrogen bomb ever and was claimed to be 3,300 times as destructive as the weapon that levelled Hiroshima.

The 30-minute film, which opens with a ‘Top secret’ title, features all the test stages – from transportation of a 26-ton weapon in an aviation bomb casing by railway, to post-explosion measurements of the radioactive fallout.

The Tsar Bomba far surpassed the largest explosion the United States has ever conducted – a 15-megaton “Castle Bravo” hydrogen bomb detonated on Bikini Atoll in 1954.