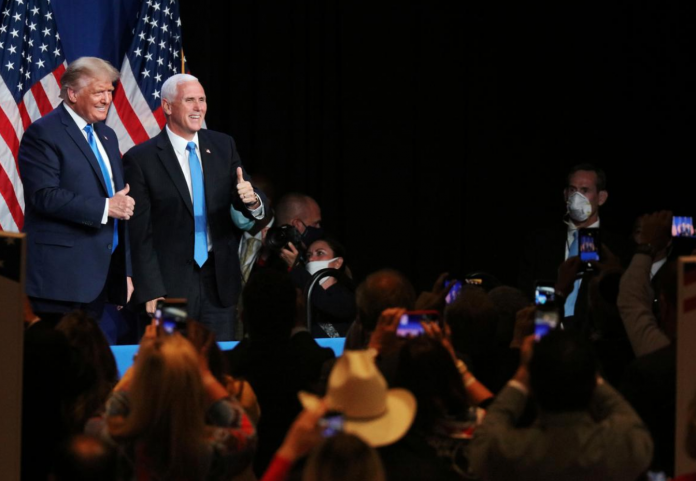 U.S. President Donald Trump kicked off the four-day Republican National Convention on Monday with remarks to Republicans who formally backed his bid for a second term, followed by speeches by “everyday Americans” and rising figures in the party.

Here are quotes from the day’s events, delivered both live and pre-recorded due to the coronavirus epidemic.

“The only way they can take this election away from us is if this is a rigged election.”

“President Trump believes in you. He emancipates and lifts you up to live your American Dream. You are capable, you are qualified, you are powerful, and you have the ability to choose your life, and determine your destiny!”

“America is a gift from God, preserved only by heroes who dared to fight and protect it as their own.”

“In this country it means you can speak your mind without retribution – without being kicked off of social media by a self-righteous censor in Silicon Valley. It means you can freely practice your religion and that church is more essential than a casino. And it means that we judge people on actions not on their immutable characteristics.”

“The American way of life is being dismantled by a group of bitter, deceitful, vengeful activists who have never built anything in their lives.”

“Joe Biden and the socialist left would be a disaster for our economy. But President Trump is leading a new era of opportunity.”

“Before Communist China gave us the coronavirus, we were breaking economic records left and right. The pandemic has set us back, but not for long. President Trump brought our economy back before, and he will bring it back again.”

“The truth is, there’s only one person who has empathized with everyday Americans, and actually been fighting for them over the past four years, and that is President Donald Trump.”

TANYA WEINREIS, WHO OWNS A CHAIN OF COFFEE SHOPS IN MONTANA:

“I am so grateful that we have leaders like President Trump standing up for us. … Thank you, President Trump – it is so exciting to be a part of this great American comeback story.”

ANDREW POLLACK, WHOSE DAUGHTER MEADOW WAS KILLED IN THE 2018 PARKLAND, FLORIDA, SCHOOL SHOOTING:

“I truly believe the safety of our kids depends on whether this man is re-elected.”

“It hurts my soul to hear the terrible names that people call Donald. The worst one is ‘racist.’ I take it as a personal insult that people would think I would have a 37-year friendship with a racist.”

“He keeps right on fighting to improve the lives of Black Americans and all Americans. He works night and day. He never stops. He leaves nothing on the field.”

“The Democratic Party does not want Black people to leave their mental plantation. We’ve been forced to be there for decades and generations. But I have news for Joe Biden. We are free. We are free people with free minds.”

MARK AND PATRICIA MCCLOSKEY, THE COUPLE WHO BRANDISHED GUNS AGAINST ANTI-RACISM PROTESTERS IN ST. LOUIS:

“These are the policies that are coming to a neighborhood near you. So make no mistake: No matter where you live, your family will not be safe in the radical Democrats’ America.”

“At this moment in history, if you stand up for yourself and for the values our country was founded on, the mob – spurred on by their allies in the media – will try to destroy you.”

“Our family went from cotton to Congress in one lifetime. And that’s why I believe the next American century can be better than the last.”

“There are millions of families just like mine across this nation … full of potential seeking to live the American Dream. And I’m here tonight to tell you that supporting the Republican ticket gives you the best chance of making that dream a reality.”

“Joe Biden and the radical left are now coming for our freedom of speech. They want to bully us into submission. If they get their way, it will no longer be the silent majority. It will be the silenced majority. This has to stop. Freedom of expression used to be a liberal value. At least before the radical left took over. Now the Republican Party is the home of free speech, the place where anyone from any background can speak their mind.”