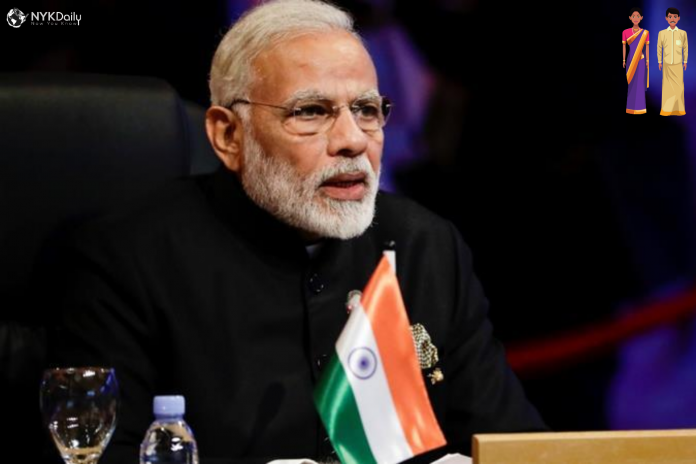 On National Handloom Day on Friday, Prime Minister Narendra Modi saluted those associated with the handloom and handicrafts sector and urged people to strengthen efforts towards a self-reliant India.

The National Handloom Day is observed annually on August 7 to honour the handloom weavers in the country and also highlight India’s handloom industry. The day seeks to focus on the contribution of handlooms to the socio-economic development of the country and also increase the income of weavers.

“On National Handloom Day, we salute all those associated with our vibrant handloom and handicrafts sector. They have made commendable efforts to preserve the indigenous crafts of our nation. Let us all be #Vocal4Handmade and strengthen efforts towards an Aatmanirbhar Bharat,” the Prime Minister tweeted.

Union Minister for Textiles Smriti Irani also took to the micro-blogging site and said, “National Handloom Day instituted on 7th August 2015 is a tribute to Swadeshi movement which was launched on the same date in 1905. Our ancestors fought for ‘Swaraj’, let us contribute towards ‘Aatmanirbhar Bharat’ and support #Vocal4Handmade.”

The Union government had declared this day as the National Handloom Day in July 2015 with the objective of generating awareness about the importance of the handloom industry in the socio-economic development of the country.

The day was chosen to commemorate the Swadeshi movement which was launched on this day in 1905 in Calcutta Town Hall to protest against the partition of Bengal by the the British Raj. The movement had aimed at reviving domestic products and production processes.

The first National Handloom Day was inaugurated by the Prime Minister at the centenary of Madras University in Chennai.

The National Education Policy 2020 is set to lay foundation of a new India of 21st century, Prime Minister Narendra Modi said on Friday.

“So far, the education system focused on what to think; now, the new education policy is emphasising on how to think,” PM Modi said addressing the ‘Conclave on transformational reforms in higher education under National Education Policy’ through a video conference.

He said he was glad that NEP 2020 hasn’t raised concerns of any bias.

Lot of emphasis has been laid on teachers’ training in the new education policy, the PM added.

“Changing times has given rise to a new global system. A new global standard is rising. It was essential that India changed its education system as per this. Creating a 5+3+3+4 curriculum, while moving ahead from school curriculum’s 10+2 structure is a step in this direction,” the prime minister said.