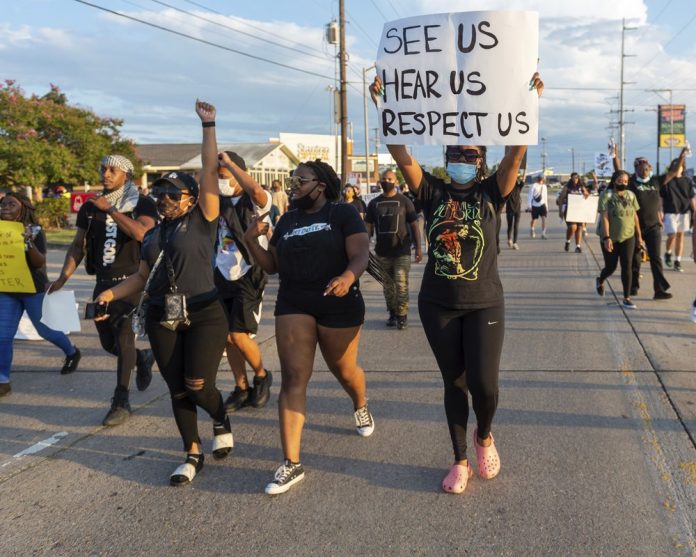 Protesters marched through a Louisiana city holding signs and at times blocking traffic in response to the fatal police shooting of a Black man that has heighten tensions between community activists and local leaders.

The march Sunday followed an event at Lafayette City Hall where protesters demanded racial justice in the death of Trayford Pellerin, who was shot and killed Friday night. The event called for demonstrations to remain peaceful, a day after protests ended with fires set on a highway median and police clearing the crowd with smoke canisters.

“No rioting, no burning buildings, no damage to vehicles, no assaulting of people,” community activist Jamal Taylor said during the rally livestreamed on his Facebook page. He said Pellerin’s mother, Michelle Pellerin, told him she wanted her son’s memory respected with peaceful protests.

The video showed what appeared to be 100 to 200 people at the event. Several people then participated in the subsequent march, and images appeared to show at least one person being detained. It was unclear whether any arrests were made. Demonstrators ended up near the gas station where Pellerin was shot.

Pellerin’s aunt and grandmother said they arrived on the shooting scene by chance Friday night, as they drove home from a day out.

Choicey Pellerin, Trayford Pellerin’s aunt, said that she and her mother saw lots of blue lights and police. Just as her mother said there must have been a bad wreck, her mother’s phone rang.

“It was her brother on the phone, saying her grandson had just been shot,” Choicey Pellerin recounted Sunday during an interview. She said her 31-year-old nephew had called twice that day, saying, “Grandma, I love you.”

Police have said Pellerin was carrying a knife and was shot when he tried to enter one convenience store in Lafayette after causing a disturbance at another.

“We understand it was a call for loitering,” said civil rights attorney Ben Crump, who is representing the family with attorney Ron Haley of Baton Rouge.

Crump and Haley, who joined Trayford Pellerin’s aunt and mother on the conference call interview, said that less than three weeks earlier, Lafayette police simply arrested a white man who had a knife and had led a car chase. Police said Donald Guidry, 42, of Rayne, had told officers he was armed and might harm himself, but was talked into surrendering without incident, according to several news reports.

“There are two justice systems in America. One for Black Americans and one for white Americans,” Crump said. “Until we address this we will continue to see more hashtags” about Black people killed by police, he said.

The bullet holes near the spot where Pellerin was killed belie police statements that they were trying to protect people inside, Haley said.

“That store’s side is riddled with bullets,” showing “callous disregard for the safety of the people in the store,” he said.

The sound of the shots and comments by young women who saw the shooting were captured on video. The state ACLU condemned what it described as a “horrific and deadly incident of police violence against a Black person.” Both the ACLU and the Southern Poverty Law Center quickly called for an investigation.

Throughout the weekend, local activists criticized how authorities responded to Pellerin’s shooting death and the protests that followed. Taylor, who spoke at Sunday’s rally at city hall, blamed outside agitators for the violence that erupted Saturday. He told the AP that he did not recognize people shown in videos setting fires.

Taylor said an earlier decision to close parks and recreation centers — most of them in Black neighborhoods — and a statement by Guillory about Pellerin’s death indicate “a person disconnected from the plight of the Black man, from the person of color who is fighting to be equal and have his life valued the same as a white person’s life is valued,” he said.

The activists also expressed their discontent that officials didn’t offer condolences to Pellerin’s family at the news conference.

“Josh Guillory is lower than a dog for that,” Taylor said Saturday.

Tensions surrounding the fatal shooting follow a global reckoning over police tactics and racial injustice that stem from the death of George Floyd on May 25 under the knee of a white Minneapolis police officer.

The family believes Pellerin may have been having a mental health crisis, Crump said.

Michelle Pellerin said her son had told her in March that he was seeking therapy for social anxiety so serious that it kept him from holding jobs for long.