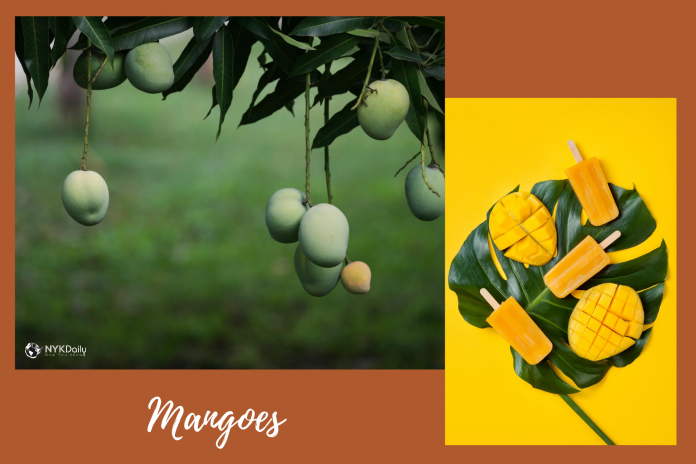 Mango is a juicy stone fruit born from various species of tropical trees belonging to the flowering plant genus Mangifera, grown mostly for their delicious fruit. Most of these varieties are found as wild mangoes.

The genus relates to the cashew family Anacardiaceae. Mangoes are endemic to South Asia. The “Indian mango” or “common mango,” Mangifera indica has been distributed worldwide to become one of the most extensively grown fruits in the tropics.

There are hundreds of cultivars of mango. Depending on the variety, mango fruit varies in sweetness, shape, skin color, size, and flesh color, which may be gold, pale yellow, or orange. Mango is the national fruit of India, Philippines, Haiti, and Bangladesh’s national tree.

Origin and Cultural Significance of Mangoes

The name ‘mango’ originates from the Tamil word ‘mangkay.’ When the invaders from Portugal settled in India, they adopted the name ‘manga.’ The importance of Mangoes finds mention in the Mahabharata, the Puranas, and Ramayana. The oldest name of this wonder fruit was Amra-Phal. It is also attributed to early Vedic literature as Sahakara and Rasala and Sahakara. The Jain goddess Ambika is represented as sitting under a mango tree. Hindus use mango leaves to decorate doors during celebrations, festivals, and weddings. In Tamil Nadu, the mango is considered one of the three royal fruits for their sweetness and flavor. The other fruits with royal status include jackfruit and banana. Sanskrit poet Kālidāsa sang the praises of mangoes. Mughal intruder Babur praises mangoes in his Babarnameh. Tyrant Alauddin Khijli enjoyed mangoes in his courts, while his poets wrote tributes about it.

Chairman Mao Zedong from China commanded Chinese farmers to grow mangoes, and distribute it to the hungry during the Cultural Revolution.

Genetic interpretation and correlation of fresh mangoes with Paleocene mango leaf fossils found in Meghalaya, India, show that the center of evolution of the mango genus was in the Indian subcontinent before joining of the Indian and Asian tectonic plates, some 62 million years ago. The mango is recognized as an evolutionary anachronism, whereby seed dispersal was once achieved by a now-extinct forager, such as old-world elephants. An anachronism is a historical discrepancy in some arrangements, especially a juxtaposition of persons, events, and in our case- evolution.

Mangoes were first cultivated in India, in 4500 BCE.

When Alexander arrived in India to fight a battle, he came in contact with mangoes for the first time. When it was time for him to return to Greece, he took several delicious fruit varieties in 321 BCE.

Mangoes arrived on the Swahili Coast in 1408 CE, and Portuguese explorers took mangoes to the Americas in the 16th Century. However, mangoes had to be pickled in America because of a lack of refrigeration.