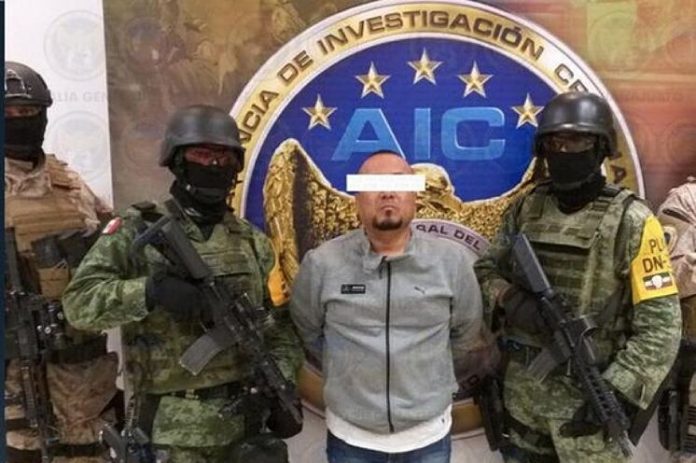 Known as “El Marro” (The Mallet), Yepez was arrested in the early hours of Sunday by soldiers and state officials during a raid on a house in Guanajuato, a central state that has become the main flashpoint of record gang violence, authorities said.

“This a tremendously successful blow for the government,” said Raul Benitez, a security expert at the National Autonomous University of Mexico (UNAM).

Boss of the Santa Rosa de Lima Cartel, a Guanajuato-based outfit, Yepez has been engaged in a bloody struggle for supremacy in the state with the Jalisco New Generation Cartel (CJNG), one of Mexico’s most powerful and violent gangs.

Yepez, 40, is the highest profile narco arrested so far under Lopez Obrador, who pledged to bring down record levels of violence plaguing Mexico when he took office in December 2018.

Instead, homicides have further increased, and last October the Lopez Obrador administration suffered serious embarrassment when it botched the detention of Ovidio Guzman, a son of incarcerated kingpin Joaquin “El Chapo” Guzman.

During the swoop on two buildings, soldiers freed a local businesswoman who had been kidnapped and seized a cache of weapons including a grenade launcher, the Defense Ministry said.

Three people were found in the second property, including a sixth suspected gangster.

News network Milenio broadcast a video of the night-time arrest of Yepez, who was wearing a grey hooded sweatshirt, jeans and sneakers. Flanked by several soldiers, Yepez gave his full name and age before also identifying himself as “Marro.”

Security forces have been gradually closing in on Yepez but he had managed to evade capture thanks to a tight network of informers who allowed him to stay one step ahead of his pursuers, according to analysts and media reports.

A thorn in the government’s side for several years, El Marro has appeared in expletive-laden videos threatening his enemies, and in June a clip of an emotional Yepez lamenting the arrest of his mother and sister was widely broadcast.

The women, who are suspected of helping to run the gang, were released when judges picked apart the case against them.

Notorious for fuel theft in a state that is crisscrossed by pipelines and home to a major oil refinery, the Santa Rosa de Lima Cartel has become increasingly engulfed in a brutal turf war with the CJNG, based in the neighboring state of Jalisco.

Hundreds of millions of dollars’ worth of fuel were being stolen every year before Lopez Obrador cracked down a few weeks after taking office.

“It’s even more money than cocaine,” he said.

Lopez Obrador blamed corruption at Pemex for fuel theft and the new management he appointed has vowed to root it out.

His detention also suggested that U.S. and Mexican security services had intensified cooperation to curtail local trafficking in the potent opiate fentanyl, a business of which Yepez was trying to secure a bigger share, he added.

U.S. Ambassador to Mexico Christopher Landau hailed news of the arrest in Guanajuato in a post on Twitter.

A carmaking hub, Guanajuato was once one of the safest regions of Mexico. But recent violence there has turned that on its head, and pushed national homicide tallies to record levels.

Once the government dismantles the Santa Rosa de Lima gang, Benitez said, it can turn up the pressure on the CJNG, which in late June was blamed for a brazen assassination attempt on Mexico City police chief Omar Garcia Harfuch.

Security Minister Alfonso Durazo said Yepez would be taken to the Altiplano maximum security prison where “El Chapo” Guzman was housed before he escaped through a tunnel in 2015.

Guzman was recaptured in 2016, extradited a year later and convicted of drug trafficking by a U.S. court in 2019.