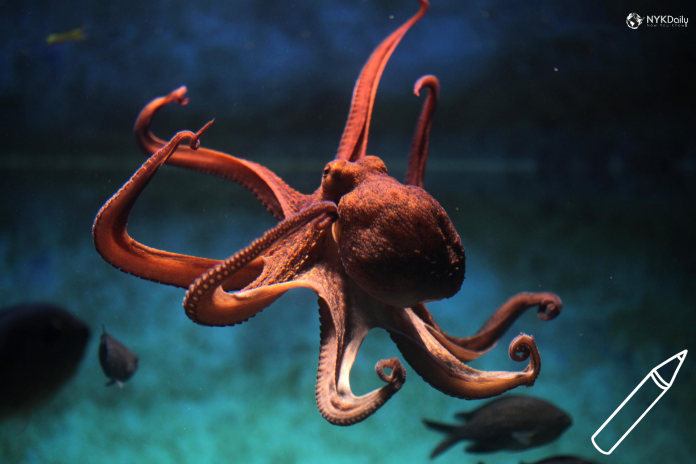 Octopuses are eight-armed marine mollusk that exists on the ocean floor and sadly, on our serving plate. They are invertebrates with a soft body, which makes them extremely flexible. Three hundred species of octopuses are known to humans. The Giant Octopus weighs up to 22 pounds and measures 22 feet in length. The smallest one is the Californian octopus, which is only 0.03ft (1cm) long.

All octopuses are deadly. They swim headfirst with arms trailing behind. They eat snails, fish, crabs, shrimp, and even other octopuses. They have a short life span of 1-5 years.

We consider the outline of an octopus resting on the ocean floor with all arms spread.

Head: Octopuses have big heads. In effect, they only have arms and a head. All organs are in the head itself.

Eyes: Octopuses have cute little eyes on each end of their heads and have excellent eyesight.

Arms: As the name suggests, octopuses have 8 arms, and they are 4 times the size of their body.

Suction cups: Octopuses have 2 rows of suction cups on all arms. Since the octopus we are considering is resting, the suction cups will not be entirely visible.

Octopuses have 3 hearts (like my ex, who gave away his hearts to three different girls. Yes, it broke mine 🙁 ), and its lips are at the centre point of arms. They have a hard parrot-like beak. Octopus can disguise to blend onto the background. They are also known for their intellect.

3 Ways to Get Creative with Window Blinds

Different Apparel Printing Methods: Pros, Cons and Everything in Between