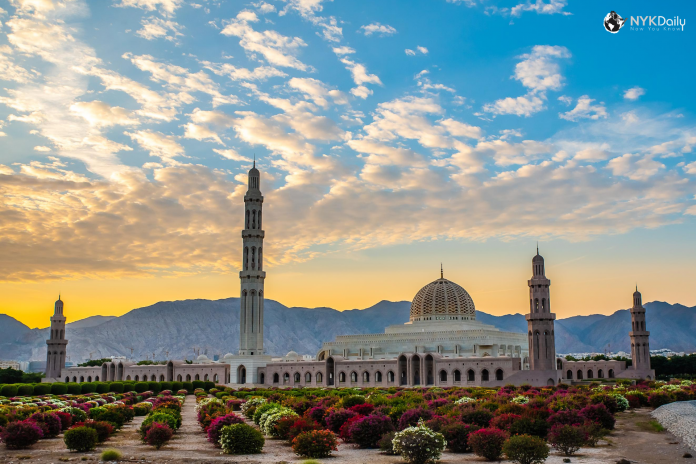 Muscat is the largest city and capital of Oman. The origin of the word Muscat is debatable. Some say, the name Muscat has Arabic roots – from moscha, meaning an inflated skin. Others believe, Muscat came from Old Persian language, which means strong-scented.

Proof of human civilization in the area around Muscat dates back to the 6,000 BCE in Ras al-Hamra, where fishermen’s burial sites have been discovered. The graves appear to be well-formed and prove the presence of burial rituals. South of Muscat, pieces of Harappan pottery sho association with the Indus Valley Civilisation. A Shiva Linga was discovered recording back to around 2,000 BCE near the remnants of Harappan pottery.

Muscat’s position as a port was recognized as early as the 1st century CE by the Greek geographer Ptolemy, who called it Cryptus Portus (the Hidden Port), and by Pliny the Elder, who considered it Amithoscuta.

The port fell to a Sassanid attack in the 3rd century CE, under the rule of Shapur I, while forced conversion to Islam occurred during the early 7th century. Muscat’s importance as a trading port extended to grow in the centuries following the Azd dynasty’s power, a local tribe. The First Imamate’s construction in the 9th century CE was the first step in combining diverse Omani tribal groups under the banner of an Ibadi state. However, tribal skirmishes remained, allowing the Abbasids of Baghdad to conquer Oman. The Abbasids stayed in the region until the early 11th century when they were thrown out by the local Yahmad tribe. Power over Oman moved from the Yahmad tribe to the Azdi Nabahinah family. During the latter rule, the people of coastal ports, such as Muscat, sprouted from naval trade and close relationship with the Indian subcontinent at the cost of the isolation of the people of the interior of Oman.

The Portuguese admiral Afonso de Albuquerque voyaged to Muscat in 1507, to establish trade relations. As he surrounded the harbor, his ships were fired on. He then decided to capture Muscat. Most of the town was torched during and after the fight.

The Portuguese controlled hold on Muscat for a hundred years, despite challenges from Persia and shelling of the town by the Ottoman Turks in mid 1500s. The Turks twice seized Muscat from the Portuguese, in the Capture of Muscat in 1552 and 1581–1588. The selection of Nasir bin Murshid Al-Ya’rubi as Imam of Oman in 1624 shifted the balance of power again in the area, from the Persians and the Portuguese to local Omanis. In the August of 1648, the Imam sent an army to Muscat, which demolished and captured the Portuguese’s high towers, reducing their grip over the town. Decisively, in 1650, a small but stubborn body of the Imam’s troops attacked the port at night, forcing an inevitable Portuguese surrender on January 23, 1650.

Civil war and repeated attacks by the Persian king Nader Shah in the 18th century destabilized the region and further difficult relations between the interior and Muscat. This power vacuum in Oman led to the rise of the Al Bu Sa’id dynasty, which has ruled Oman ever since.

With the British support, Qaboos bin Said put an end to the Dhofar uprising and consolidated different tribal territories. He renamed the country the Sultanate of Oman (called Muscat and Oman hitherto), to end the interior’s withdrawal from Muscat. Qaboos engaged the services of capable Omanis to fill positions in his new government, representing from such corporations as Petroleum Development Oman (PDO). New ministries for social services such as education and health were established. The development of Mina Qaboos, a new port thought initially by Sa’id bin Taimur, was constructed during the early days of Qaboos’ rule. Similarly, a new international airport was developed in Muscat’s Seeb district. A complex of warehouses, offices, shops, and homes changed the old village of Ruwi in Muttrah into a mercantile community.

The first five-year development plan in 1976 emphasized Muscat’s infra development, which presented new opportunities for trade and tourism in the 1980s–1990s, drawing migrants from around the region.