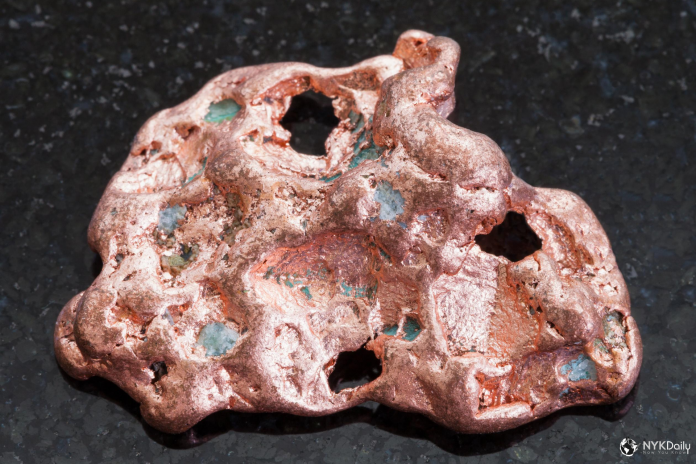 Copper is an element with the symbol Cu and atomic number 29. It is a malleable, soft, and ductile metal with very high electrical and thermal conductivity. A freshly flashed surface of pure copper has a pinkish-orange color. Copper is employed as a conductor of electricity and heat, as a construction material. Copper is also used as a component in numerous metal alloys, such as copper with silver used in jewelry, and cupronickel used to make coins and marine hardware.

History of Copper runs parallel with the history of civilization.

Copper occurred naturally as native metallic copper and was known to some of the oldest civilizations on record. The history of copper records to 9000 BCE in the Middle East; a copper pendant was found in modern-day northern Iraq that dates to 8700 BCE. Evidence suggests that meteoric iron (but not smelted iron) and gold were the only metals used by humans before copper. The history of copper metallurgy is thought to match this order: First, cold working of native copper, then annealing, smelting, and, ultimately, lost-wax casting. In southeastern Anatolia, all four of these methods appear simultaneously at the start of the Neolithic c. 7500 BCE.

Copper smelting was separately invented in many places. It was discovered in the Himalayan region of Ancient India in 4000BCE, in China, in 2800 BC, in Central America around 600 CE, and West Africa in the 9th CE. Investment casting was developed in 4500–4000 BCE for the first time in Southeast Asia, and carbon dating has confirmed mining at Alderley Edge in Cheshire, UK, from 2280 to 1890 BCE.

Ötzi the Iceman, a male, recorded from 3300–3200 BCE, was seen with an ax with a copper head 99.7% pure; massive arsenic levels in his hair suggest an association with copper smelting. Experience with copper has helped develop other metals; in particular, copper smelting led to the invention of iron smelting. Production in the Old Copper Complex in Wisconsin and Michigan is recorded between 6000 and 3000 BCE. Natural bronze, a copper made from ores rich in arsenic, silicon, and (rarely) tin, came into everyday use in the Balkans around 5500 BCE.

Alloying tin with copper to make bronze was first recorded about 3900 years after the invention of copper smelting. Sumerian, Indian and Egyptian artifacts of bronze and copper alloys date to 3000 BCE. The Bronze Age began in Europe around 3700–3300 BCE, in Northwestern Europe, about 2500 BC. It ended with the start of the Iron Age, 2000–1000 BCE in the Near East, and 600 BCE in Northern Europe.

In Greece, copper was known by the pseudonym chalkos. It was an essential resource for the Greeks, Romans, and other early peoples. Roman times were known as aes Cyprium, aes being the generic Latin term for copper alloys and Cyprium from Cyprus, where much copper was mined. The phrase was eased to cuprum, hence the English copper. Aphrodite (Venus in Rome) represented copper in alchemy and mythology because of its radiant beauty and its early use in composing mirrors; Cyprus was sacred to the goddess. The seven heavenly bodies known to the early humans were linked with the seven metals known in antiquity, and Venus was attached to copper.

As regards the essential alloys of copper, India can boast nothing compared to a bronze statue of Apollo at the Roman Palatine Library. Still, India can justly claim significantly superior knowledge about its chemistry. In ancient India, copper, called as Ayas in Sanskrit, was used in the holistic medical science Ayurveda for surgical medical equipment and instruments. Indians also used copper for drinking water and sterilizing wounds, and later to treat burns, headaches, and itching. The Rig Veda mentions ayas (copper) and states that the Dasyus had Ayas (RV 2.20.8). In RV 4.2.17, “the gods [are] smelting like metal/copper ore the human generations.” Yajurveda, written in around 1200 BCE, seems to know both copper and Iron. In the Manu Smriti (6.71), the following analogy is discovered: “For as the dirt of metallic ores, melted in the blast (of a furnace), are exhausted, even so, the taints of the organs are destroyed through the destruction of the breath.”

Copper was first utilized in early Britain in about the 3rd or 2nd century BCE. In North America, copper mining began with limited workings by Native Americans. Native copper is known to have been extracted from Isle Royale sites with primitive stone tools between 800 and 1600.

Copper metallurgy was prospering in South America, particularly in Peru, around 1000 CE. Copper burial decorations from the 15th century have been revealed, but the metal’s commercial production did not begin until the advanced 20th century.

The cultural role of copper has been significant, especially in money. Romans in the 6th through 3rd centuries BCE used copper lumps as currency. At first, the copper itself carried a value, but slowly, the copper’s look and shape became more powerful. Octavianus Augustus Caesar’s coins were created from Cu-Pb-Sn alloys while Julius Caesar had his own coins made from brass. With a predicted annual output of around 15,000 t, Roman copper smelting and mining activities reached a scale unprecedented until the time of the Industrial Revolution; the regions most deeply mined were those of Cyprus, Hispania, and in Central Europe.

The doors of the Temple of Jerusalem used Corinthian bronze treated with depletion gilding. The method was widespread in Alexandria, where alchemy is thought to have begun.