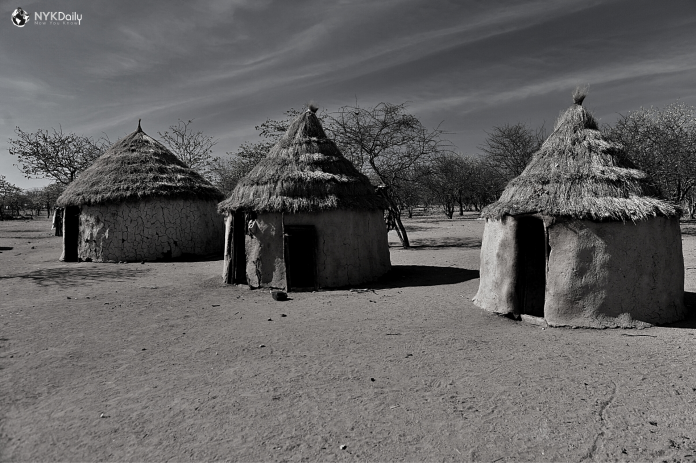 The Himba (OvaHimba) are indigenous peoples with an estimated population of about 62,000 people living in Namibia, on the other side of the Kunene River in southern Angola, and in the Kunene Region. A few people are left of the OvaTwa, who are also OvaHimba but are hunter-gatherers. However, the OvaHimba do not like to be compared with OvaTwa. Culturally distinct from the Herero people, the OvaHimba are pastoralist, semi-nomadic people, and speak OtjiHimba, a variety of Herero, which relates to the Bantu family within Niger-Congo.
They have base farms where crops are cultivated but may have to move within the year, depending on access to water and rainfall. The OvaHimba are recognized as the last nomadic (semi) tribe of Namibia.

The Himba history is filled with disasters, including guerrilla warfare and relentless droughts.

Between 1904–1908, they experienced the same attempt at genocide during the Herero Wars led by the German Empire dictator government in German South-West Africa under Lothar von Trotha that destroyed and wiped out the Nama people and the Herero people during the Namaqua and Herero Genocide.

In the 1980s, it seemed the OvaHimba tribe was coming to a close due to an end in political conflicts and adverse climatic conditions. A harsh drought annihilated almost all their livestock. Many gave up their cows and became refugees in the town of Opuwo, living in slums on international philanthropic aid to cope with widespread famine and livestock losses. OvaHimba surviving over the border in Angola were victims of gruesome kidnapping during the South African Border War, either taken as prisoners or kidnaped to join the People’s Liberation Army’s Angolan subsidiary of Namibia.

The OvaHimba are a monotheistic group who worship the god Mukuru and their ancestor reverence (clan’s ancestors). Mukuru only sanctifies, while the ancestors can curse and bless. Each group has its sacred ancestral fire, which is administered by the fire-keeper. The fire-keeper addresses the traditional holy fire every seven to eight days to communicate with Mukuru and the ancestors on behalf of his family. Often, because Mukuru is busy in a scattered realm, the ancestors act as Mukuru’s deputies.

The OvaHimba believe in omiti, which some interpret as witchcraft, but others call “bad medicine” or “black magic”.

Some OvaHimba believes that death is caused by omiti, or rather, by someone using omiti for wicked purposes. Additionally, some believe that evil people who use omiti can place bad thoughts into another’s hear or cause unusual events to happen. But users of omiti do not always directly attack their victims; sometimes, they target a loved one or relative. Some OvaHimba will ask a traditional African diviner-healer to disclose the reason behind an unusual event or the root of the omiti.

Both the Himba women and men are habitual to clothing traditional wears that fit their living conditions in the Kaokoland and their village’s hot semi-arid climate. In most occurrences, this consists of skirt-like clothing made from sheepskin or calfskins, and sometimes sandals for footwear. Women’s loafers are made from cows’ skin, while men’s are made from worn-out car wheels.

The OvaHimba are polygamous, with the common Himba man being a husband to two wives simultaneously. They also exercise early arranged marriages. Young Himba girls are given to male spouses chosen by their families. This happens from puberty, which may mean that girls aged ten or below are married off. This practice is prohibited in Namibia, and even some OvaHimba dispute it, but it is widespread. Among the Himba people, it is common as a rite of the entrance to circumcise boys before they reach puberty. Upon marriage, a Himba boy is deemed a man, unlike a Himba girl who is not regarded as a fully-fledged woman until she delivers a child.