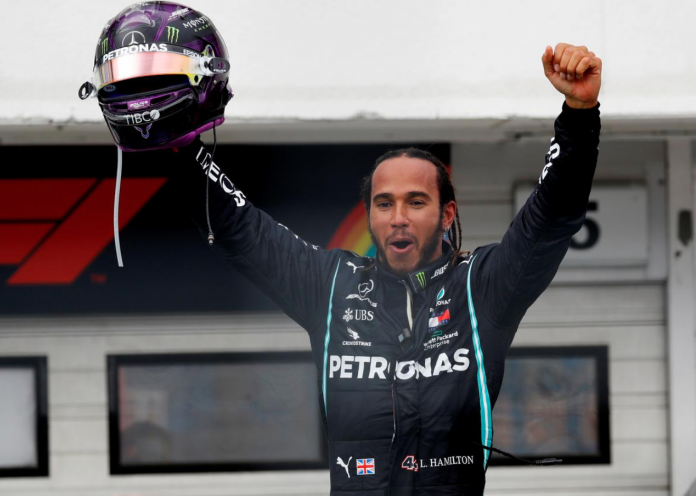 Formula One leader Lewis Hamilton went fastest in a searingly hot second practice for the Spanish Grand Prix on Friday with Mercedes again dominant after losing out to Red Bull last weekend.

The six-times world champion, who is 30 points clear of Red Bull’s 70th Anniversary Grand Prix winner Max Verstappen after five races, lapped the Circuit de Catalunya outside Barcelona with a best time of one minute 16.883 seconds on soft tyres.

Team mate Valtteri Bottas, who had been faster in the morning session with a lap of 1:16.785 also on softs, was 0.287 off the Briton’s pace on an uneventful afternoon where track temperatures exceeded 50 degrees Celsius.

Verstappen was third in both sessions, 0.939 off the Finn’s pace in the first and then 0.821 slower in the second, with Renault’s Daniel Ricciardo fourth on the timesheets after lunch.

Hamilton has won the last three Spanish Grands Prix and is going for his fourth win in six races on Sunday in a race rescheduled from May due to the COVID-19 pandemic.

“It’s definitely quite tough out there, it’s the hottest that it’s been,” said Hamilton. “I don’t think I’ve been to Spain when it’s this hot.

“It’s beautiful weather but it’s a killer in the car. And its obviously very tough on tyres as well.”

Mercedes struggled with tyre blistering last Sunday at Silverstone, when Verstappen won, but Hamilton said they were looking OK in that area — although they had not seen any blistering last Friday either.

“It’s been a good day… on the long runs we looked very close to the Red Bull so I think it’s going to be a really close race,” said Hamilton.

Verstappen said his day had also been positive, even if the Red Bull was still behind Mercedes on single lap pace.

Vettel has a new chassis for the race after Ferrari found a crack in the one he used last weekend.

Haas’s Romain Grosjean, whose car also has a Ferrari engine, was a surprise fifth fastest in the afternoon and had the sixth best time in the opening session.

Briton George Russell sat out the opening session, handing his car to Israeli development driver Roy Nissany who was the slowest driver on track.