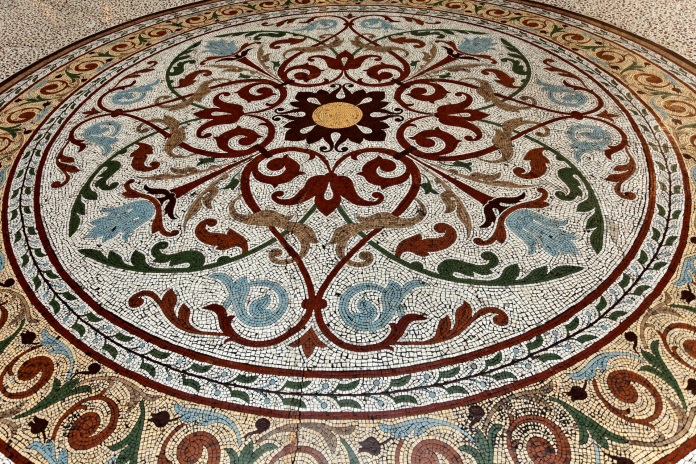 Mosaic is defined as a coherent image or pattern with each element built up from small pieces of substances like ceramic, glass, or stone held together by plaster or any similar element.

The history of the mosaic is old, mysterious, and colourful (irony). Let’s explore the Roman and Greek Mosaic art in detail.

The oldest examples of mosaics made of different materials were found at a temple in Abra, Mesopotamia, and are recorded to 3150 BCE. They consist of pieces of shells, colored stones, and ivory. Excavations at Susa and Chogha Zanbil show proof of one of the oldest glazed tiles, dating from around 1500 BCE. However, mosaic designs were not used until the times of Roman influence and the Sassanid Empire.

The Romans and Greek

The mythological theme or pictures of hunting or other pursuits of the wealthy was celebrated as the centrepiece of a more comprehensive geometric design, with heavily emphasised borders. Pliny the Elder quotes the artist Sosus of Pergamon by name, expressing his mosaics of the food left on a floor after a meal and a bunch of doves drinking from a bowl. Both of these designs copied widely.

Greek figural mosaics could have been reproduced or copied paintings from a far more prestigious art form. The style was adopted by the Romans so that extensive floor mosaics decorated the floors and rooms of Hellenistic villas and Roman dwellings from Britain to Dura-Europos.

Most identified names of Roman mosaic workers are Greek, implying they dominated high-quality work across the empire; undoubtedly, most ordinary artisans were laborers. Beautiful mosaic floors are found in Roman villas across North Africa, in places such as Carthage. They can still be seen in the whole collection at the Bardo Museum in Tunis, Tunisia.

There were two main methods in Greco-Roman mosaic: opus vermiculatum used small tesserae, typical cubes of 4 millimeters or less, and was developed in workshops in comparatively small panels which were brought to the site glued to some interim support. The tiny tesserae allowed incredible detail and access to the illusionism of painting. Often small groups called emblemata were embedded into walls or as the highlights of larger floor-mosaics in coarser work. The standard technique was opus tessellatum, using more extensive tesserae, which was laid on site. There was a distinctly Italian style using black on a white background, which was undoubtedly cheaper than fully colored work.

In Rome, Nero and his artists used mosaics to cover some exteriors of ceilings and walls in the Domus Aurea. However, it was not until the Christian era that figural wall mosaics became a significant form of artistic representation. The Roman church of Santa Costanza, which served as a mausoleum for the Imperial family, has religious mosaic and ornamental temporal ceiling mosaics on a round vault, which probably describe the style of contemporary palace decoration.

The mosaics of the Villa Romana del Casale near Piazza Armerina in Sicily are the most extensive collection of late Roman mosaics in situ in the world and are preserved as a UNESCO World Heritage Site. The large villa Rustica, which was owned by Emperor Maximian, was mainly built in the early 4th century. The mosaics were concealed and protected for 700 years by an avalanche that happened in the 12th century. Essential pieces are the Circus Scene, the 64m long Great Hunting Scene, the Labours of Hercules, the Little Hunt, and the famous Bikini Girls, showing women offering a range of sporting activities in garments that match 20th Century bikinis. The peristyle, the royal apartments, and the thermae were also adorned with ornamental and imaginary mosaics.Other notable examples of Roman mosaic art in Sicily were discovered on the Piazza Vittoria in Palermo, where two houses were found. The most critical scenes described are Alexander the Great’s Hunt, Orpheus mosaic, and the Four Seasons.

In 1913 the Zliten mosaic, a Roman compilation popular for its many scenes from hunting, gladiatorial competitions, and everyday life, was found in the Libyan town of Zliten. In 2000, excavators working in Leptis Magna, Libya, uncovered a 30 ft length of colorful mosaics made during the 1st or 2nd century CE. The findings show a warrior in warfare with a deer, four young men fighting a wild bull to the ground, and a gladiator sleeping in a state of fatigue, gazing at his slain opponent. The mosaics adorned the walls of a refreshing plunge pool in a bathhouse within a Roman villa. Scholars note the gladiator mosaic as one of the most notable examples of mosaic art ever discovered — a “masterpiece equivalent in quality with the Alexander Mosaic in Pompeii.”