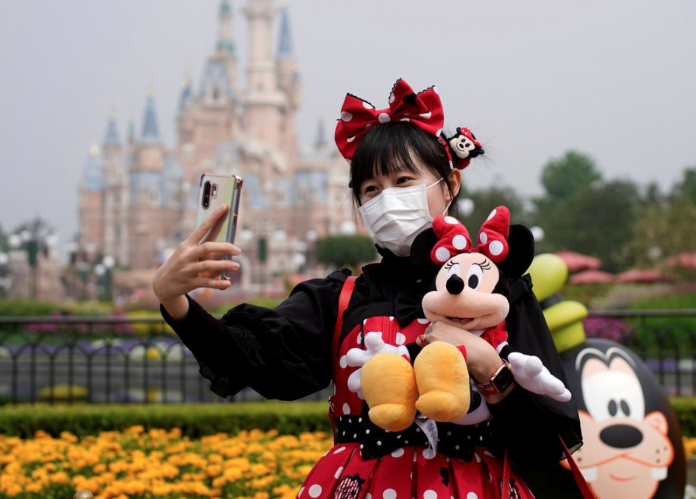 Walt Disney Co (DIS.N) on Tuesday avoided the unmitigated disaster some investors feared as it eked out an adjusted profit amid the coronavirus pandemic that shut down parks, movie theaters and sporting events across the globe.

Disney’s quarterly profit of 8 cents per share on an adjusted basis beat expectations for a loss of 64 cents, sending the stock up 5% in after-market trade.

The company took a nearly $5 billion (3.83 billion pounds) charge due to the pandemic and shifting media habits. COVID-19 wiped out $3.5 billion in operating profit in the parks division.

“The majority of businesses worldwide have experienced unprecedented disruption as a result of the pandemic,” Disney Chief Executive Bob Chapek told analysts. “Most of our businesses were shut down, and this had a huge impact.”

Investors overlooked total revenue that fell short of expectations by nearly $600 million and focused on divisions including parks and its media networks with revenue declines that were not as bad as expected.

The Disney+ streaming service, which had 60.5 million paying customers as of Monday, was a bright spot in the quarter, Chapek said. Disney had reported 54.5 million subscribers as of May 4.

“What we plan to do is invest even more in our content in order to keep that machine cranked and going,” he said.

Combined with Hulu and ESPN+, Disney has attracted more than 100 million streaming customers worldwide since launching its big streaming effort nine months ago. Netflix Inc (NFLX.O), which got a head start in the market when it began streaming 13 years ago, boasts 193 million.

The coronavirus outbreak forced Disney to delay the theatrical debut of movies including the live-action epic “Mulan” about a Chinese warrior.

In a surprise move, Disney said it will release “Mulan” on Disney+ on Sept. 4 for people to watch at home at a cost of $30, and in theaters in markets where Disney+ is not available.

Chapek said the shift was a one-time event and did not represent a shift in strategy.

The decision followed a deal in July between Comcast Corp’s (CMCSA.O) Universal Pictures and cinema chain AMC Entertainment Holdings Inc (AMC.N) to allow the studio to release films directly to consumers after just three weeks in theaters, down from the average three months.

Disney also said it would launch a new international streaming service under the Star brand.

“Investors are looking beyond the tough quarter to continued reopening of parks, while Disney+ is expected to see further growth,” said Investing.com analyst Haris Anwar.

Theme park closures from April to June led to an operating loss of $1.96 billion in the parks and consumer products business. Even as four of its six theme park resorts around the world have opened, social distancing rules have limited attendance.

The media network segment, which includes ESPN and Disney channels, reported a 48% jump in operating income to $3.15 billion.

The direct-to-consumer and international unit, which houses the Disney+ streaming service, reported an operating loss of $706 million, below the $1.06 billion that analysts expected.

Operating income at the movie studio fell 16% to $668 million as many movie theaters remained closed.

Overall revenue fell 42% to $11.78 billion. Analysts on average had expected revenue of $12.37 billion, according to Refinitiv IBES data.