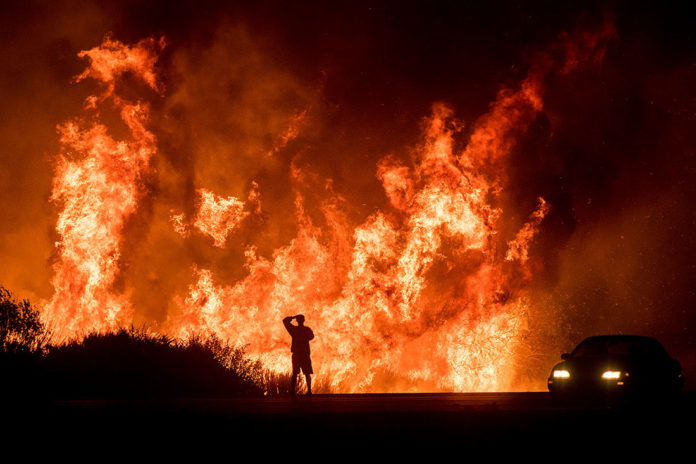 Firefighters scrambled to protect thousands of homes from a wildfire racing through brush-covered mountains north of Los Angeles on Friday that caused hundreds of evacuations and burned 21 structures.

The blaze, dubbed the Lake Fire, swelled to over 17,000 acres (6,880 hectares), forcing up to 1,500 people from their houses after erupting on Wednesday afternoon in the Angeles National Forest.

Triple digit temperatures and single digit humidity fanned flames on Friday evening, and little let-up was expected over the weekend with an excessive heat warning in effect across Southern California.

The cause of the blaze was under investigation but human activity is likely to blame, said U.S. Forest Service spokesman Andrew Mitchell.

No casualties were reported but the blaze threatened 5,420 homes and other structures in communities about 40 miles (65 km) north of downtown Los Angeles where residents have been told to prepare for possible evacuations over the weekend, Garrido said.

Much of the area has not had a fire in 60-100 years, allowing flames to move swiftly through fuel-choked areas.

Across the United States, fires have been less ferocious so far in 2020, burning around 1.4 million fewer acres than in the same period of 2019. Conditions are expected to worsen in California next month when Santa Ana winds arrive in the south and El Diablo winds pick up in the North.

In drought-stricken Colorado, the Pine Gulch Fire, burning near Grand Junction, about 190 miles west of Denver, has blackened over 73,000 acres in remote mountain terrain, making it the fourth-largest in the state’s history.