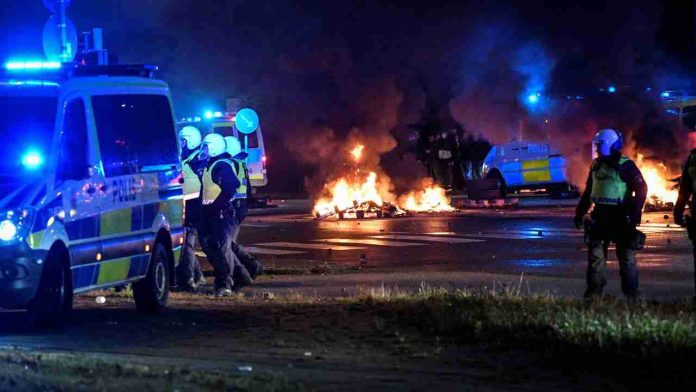 Sweden witnessed violence and riots on Friday evening as hundreds of people gathered in the southern Swedish town Malmo and resorted to incidents of vandalism including tire burning and stone-pelting at police vehicles.

Rasmus Paludan, a right-wing Danish leader was denied entry in Sweden to have a meeting in Malmo, according to some international media reports while others said he was detained ahead of a planned meeting in the town.

After the incident, some of the members of the far-right political party staged a Koran-burning protest. In retaliation, a large number of people hit the streets leading to massive riots and incidents of vandalism across the town. It is said that close to 300 Islamic rioters gathered to conduct acts of vandalism.

As captured in the videos online, It can be seen that rioters chanted ‘Allahu Akbar’ while they were recorded in the video, hurling stones and paving bricks on police vehicles that arrived to control the situation. Tires were burnt on streets as the vandalism escalated. Several police vehicles and at least one rescue service vehicle have been damaged.