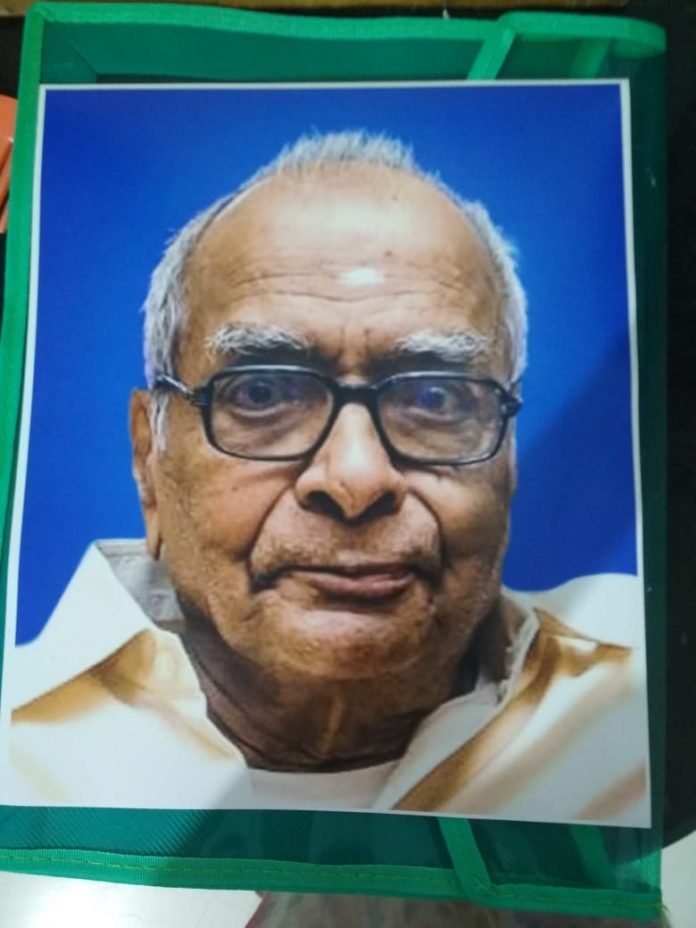 My Appa, Gayatri Nathan was born in Chendamangalam – Kerala on 22nd Jan 1934. He was the youngest amongst the five siblings of Panchanadam and Thailambal. At the age of 8, Appa was doing his Sandhya Vandanam (a mandatory religious ritual supposed to be daily performed, traditionally, by Dvija communities of Hindus, particularly those initiated through the sacred thread ceremony referred to as the Upanayanam and instructed in its execution by a Guru) he got the news that his teacher’s toddler had drowned in the lake and somebody was needed to bring the body ashore. As he made his way to be there, only to be warned by the villagers that if he recovered the body, his father would die (A belief of the traditional Tamil Brahmins when the Father is Alive, the Son should refrain from the dead bodies). Alarmed, he stepped back. Soon his dad arrived on the scene and thundered – “Son, Plunge right into the waters! If I die because of it, so be it! Let the inconsolable family get back at least the body of the child.” After he returned with the body, his father again instructed him to give his tender shoulder to the bier! From then on, he was particular about attending funerals, not weddings.

At the age of 18, post his matriculation exam, (he was the only one to pass in the family). He came to the City of Dreams –Mumbai formerly called as Bombay. In those days anyone having sound knowledge of Typing and Shorthand easily got a job and he got employment in Air India – Nirmal Building at 1954. Dedication to his work, saw him take promotions and he soon became the Managing Director’s Secretary in a very short span. There were permanent postings offered to him in France and Germany but he refused on the pretext of serving his Father in the old age. Always a positive personality with a radiating smile, he was involved in many spiritual activities… The Sapthakam at the Geeta Govinda Hall, Ram Navami Celebrations at Ashtika Samaj Kochi Guruvayoor.

There was instance I would like to bring into notice, On November 30, 1970, a massive fire broke out in the temple. It began from the western chuttambalam and raged for five hours. But the Sreekovil (Altar), the Vigraha deity of Guruvayoor, sub-shrines of Ganapathy, Sastha, Bhagavathy and flag-staff remained unaffected. People from all walks of life, irrespective of age, caste, creed and religion fought the fire, setting a glorious example of humanity. Later, the temple was rebuilt.

The incident took place on November 29 during the season of Ekadasivilakku. On this day, Vilakku was celebrated on a grand scale and all the lamps in the Vilakkumatam were lit. After the Seeveli procession, the function came to an end and the gates of the Gopuram were closed. Around 1.00am, somebody who lived near the western chuttambalam saw a blaze within the Temple. As word spread, a huge crowds of people, regardless of religious differences rushed to douse the fire. Later, fire tenders arrived. The conflagration was controlled only by 5.30 am.

Authorities had already removed valuables from the Altar. The Ganapathy deity, Sastha deity and the main deity of Lord Guruvayurappan were shifted to Koothambalam and then to a safer place, residence of the Tantri priest. The fire gutted the whole chuttambalam, the entire Vilakkumatam on the west, south and north. The Chuttambalam was only three yards off, but still the fire did not even touch dry flower garlands, which hung on the corner of the Sreekovil altar. Appa along with 4 of his Friends were a part of the rescue committee team from Mumbai to save the lives and help cremate the dead.

In those days, Air India and Indian Airlines were only the two aircrafts operating in India. Appa with his high influence helped people in getting the tickets for emergency related matters – death of loved ones/ Birth of Children/Important ceremonies etc.  One such incident was of our family Priest Ambi Vadiyar – When his father had expired in Chennai, all the flight was full, and Appa spoke to the special landing and ensured the priest travelled in the Jump Seat available. During the 1985 Kanishka Air Craft Crash, he was one of the Volunteers for the rescue operations at Mumbai Airport. A Dare Devil was he in terms of handling extreme pressure situations.

During the year 1991, Appa took a VRS Retirement and bid adieu to Air India due to family commitments. Later on his second innings began at Chembur Fine Arts. In those days, whilst in Ghatkopar, he played a pivotal role during the Ganapathy Pooja at our Building and Ayappa Pooja in our colony. He was the one who patented and immortalized the Ayyapan Poojai Payasam (Special Kheer for the Almighty). Be it a young child or an old man, Appa had the knack to be friendly with everybody. At Fine Arts Society, his inter personal skill became very evident, with him installing the Ganesha Vigraham and then organizing the Thyagaraja Aradhana Festival and Celberations.

With age catching up, he became a victim of Hypertension and Diabetes and later on there was series of occasion where he had to be admitted due to Hypoglycemia (A low diabetes Syndrome). He used to be on his toes very fast post recovery. An ardent lover of Shiva performed the daily Shiva Pooja which is more than 350 years old on a regular basis. He was totally committed in his work.

After serving nearly 18 years at Fine Arts, he shifted his residence from Ghatkopar to Dombivili wherein he could spend his time with his daughters and Grand Sons and Grand Daughters. He was spiritually blended throughout his life and never used to mince words.

I remember an occasion , when on my friend Aradhana Swamini an Chinmayananda disciple had come to visit him last year during the Diwali period. He was unwell during that time, despite the whole family warning him to go slow, he chanted continuously for 45 minutes, often breathless, and gave her the panoramic view of life in all its hues. As she rose to leave, he blessed her abundantly and by placing his hand on her head and in a straight tone confessed – “I have indulged in smoking, boozing gutka and Paan.”What honesty and poise at this stage”

On 13th August 2020, in the wee hours of the morning at 3.00 AM, Appa was unwell and insisted on having the morning Kapi (Coffee) from my Eldest Sister, Padma who with her husband had been diligently looking after both Amma and Appa. After half an hour he started coughing very badly, my mother gave the last drop of water and he passed away peacefully. The doctor examined him and he was declared dead due to Cardiac Arrest and Hyper Tension. He lived a full life of 86 years and has set an example to his entire family.

My 3rd Sister Lalitha stated in the final rites, Appa – I thought you will never die, you will always remain immortal. Very true words, I feel however the truth are we are all energies and Appa is a doting figure.

Just Energy we are,

In this Tiny Little Earth.

We Meet, We Speak, We Depart,

What remains is the Memories Vast.

Caring and sharing a part of Life.

To remain Positive we need to Strive.

Try and make a Good Place,

( Valuable inputs from My Sisters -Padma, Vijiya and Lalitha)