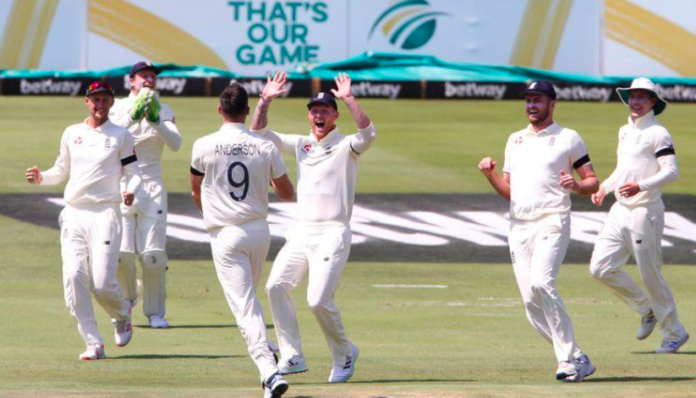 England’s James Anderson became the first seam bowler to reach 600 test wickets, reaching the milestone in a gloomy last session of a rain-hit final day of the third test against Pakistan at the Rose Bowl on Tuesday.

Anderson had Pakistan captain Azhar Ali caught at slip by Joe Root with a ball that zipped off the pitch with a little more bounce to catch the edge and leave the tourists on 109 for three in a game that seems destined for a draw.

It had been an agonising wait for Anderson, marooned on 599 wickets after his teammates dropped four catches in 37 balls off his bowling in the innings, and with rain pouring down overnight and into the final morning.

Anderson’s first test victim was Zimbabwe batsman Mark Vermeulen at Lords in May 2003 as he picked up 5-73 on debut, and it took him 156 matches to reach 600.

Anderson became England’s highest test wicket taker in his 100th match, claiming his 384th victim against the West Indies in 2015 to beat the record held by Ian Botham.

There had been suggestions from some quarters that the 38-year-old should retire ahead of this match after a below-par series to date, but he responded with 5-56 in Pakistan’s first innings in an excellent display of swing bowling.

* Made his test debut against Zimbabwe at Lord’s in May 2003, having broken into the one-day international team the previous year.

* Took his 100th test wicket by dismissing South Africa’s Jacques Kallis in 2008 and his 200th by removing Australia’s Peter Siddle in the 2010-11 Ashes series.

* Had New Zealand’s Peter Fulton caught at second slip by Graeme Swann in 2013 to become only the fourth Englishman to reach the milestone of 300 test wickets.

* Became England’s highest wicket taker in his 100th test, claiming his 384th victim against West Indies in 2015. Surpassed Ian Botham’s haul of 383 when he had Denesh Ramdin caught by Alastair Cook at first slip.

* Claimed his 400th test wicket when he had New Zealand’s Martin Guptill caught at slip by Ian Bell later that year.

* Became only the sixth bowler to take 500 test wickets when he ripped West Indies batsman Kraigg Brathwaite’s middle stump out of the ground with an inswinger in 2017. Stuart Broad has since joined the list of bowlers with 500 or more victims.

* Took his 564th wicket in 2018 to overtake Australia’s Glenn McGrath to become the leading fast bowler in test history.

* Claimed his 28th five-wicket haul against South Africa in January to move past Botham on the all-time list of test five-fors in an England jersey.

* After a frustrating start to the summer, during which he had to dismiss talk of retirement, Anderson claimed his 600th test wicket by dismissing Pakistan’s Azhar Ali on Tuesday.