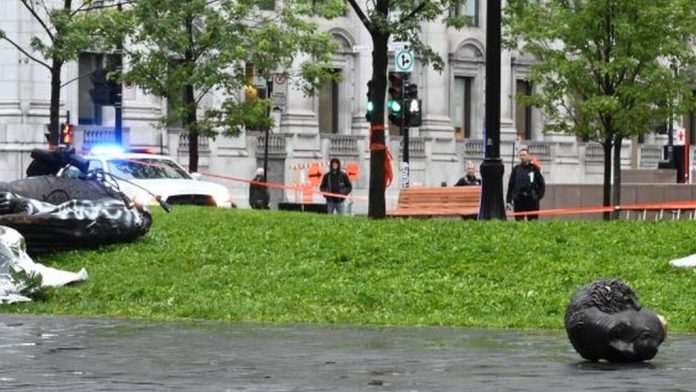 Activists in Montreal have toppled a statue of Canada’s first Prime Minister, John A. MacDonald, who was linked to policies that killed many indigenous people in the late 19th Century, the media reported on Sunday.

Video captured the moment the statue’s head flew off and bounced on the pavement nearby, the BBC reported.

“Destroying parts of our history is not the solution,” he said in a tweet on Saturday.

“We must fight racism, but destroying parts of our history is not the solution. Vandalism has no place in our democracy and the statue must be restored,” the premier added.

Earlier on Saturday, a peaceful demonstration calling for defunding the police took place in central Montreal.

A leaflet distributed at the protest described MacDonald as “a white supremacist who orchestrated the genocide of Indigenous peoples with the creation of the brutal residential schools system”, according to Canadian broadcaster CBC.

MacDonald was Prime Minister for 19 years in the 1860s-1890s and is remembered for his nation-building policies but he also created the residential schools system, said the BBC report.

For more than a century, the system forcibly removed at least 150,000 indigenous children from their homes and sent them to state-funded boarding schools.

Many children were abused and some died, and they were were forbidden from speaking their own language or practising their culture.

A government report in 2015 called the practice “cultural genocide”.

He was also accused of allowing famine and disease to kill many indigenous people and his government forced some First Nation communities to leave their traditional territories, withholding food until they did so.