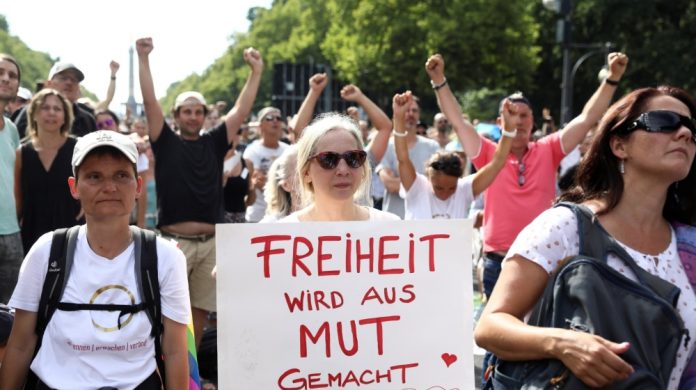 On Saturday, some 38,000 people took to the streets in the city for mostly peaceful demonstrations, the BBC reported.

But later in the day, hundreds of protesters, many from the far right, tried to storm the Reichstag, the home of Germany’s federal Parliament.

A number of people were arrested and German politicians condemned the attack as “shameful” and “unacceptable”.

Some of those involved had insignia from the far-right Reichsburger movement.

Vice Chancellor Olaf Scholz said: “Nazi symbols as well as Reichsbürger and Imperial German flags have no place in the German Bundestag.”

Earlier some 200 people were arrested at one rally near the Brandenburg Gate, which the authorities blamed on right-wing agitators who were said to have thrown stones and bottles.

Rallies protesting against coronavirus restrictions took places in other European cities with some demonstrators calling the virus a hoax, said the BBC reported.

Thousands gathered in London’s Trafalgar Square to protest against issues including coronavirus restrictions and 5G.

Signs reading “masks are muzzles” and “new normal = new fascism” were held up.