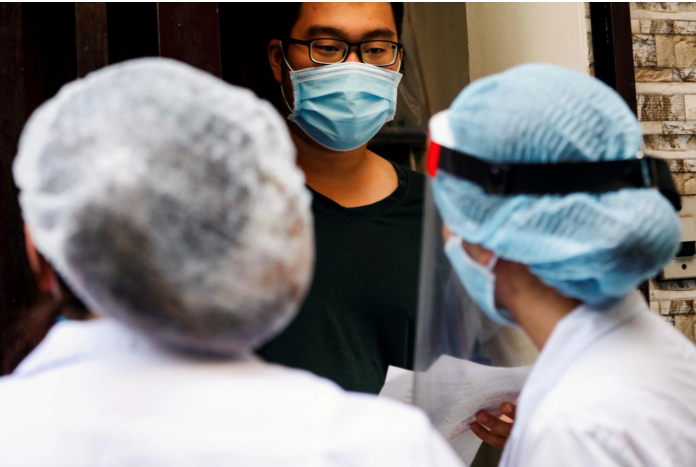 Vietnam recorded its first death from COVID-19 on Friday after winning plaudits worldwide for one of the most successful pandemic responses to containing the novel coronavirus outbreak.

The country of 96 million had gone 100 days without infection before an unexpected cluster of new cases surfaced in the central and popular resort city of Danang a week ago.

Vietnam’s health ministry on Friday reported 45 new infections in the city, marking the Southeast Asian country’s biggest single-day jump in cases since the beginning of the pandemic.

The capital, Hanoi, has started mass coronavirus testing, shut bars and nightclubs, banned large gatherings, and urged tens of thousands of domestic travellers to report to authorities as the country scrambled to contain the fresh spread of the virus.

Patient 428, a 70-year-old man who appears to have contracted the disease in Danang, died on Friday, the official Vietnam News Agency (VNA) said.

The 45 latest patients, aged between 27 and 87, are linked to three hospitals and two clinics in Danang, according to the health ministry, which overnight sent a special task force of health experts, along with more than 1,000 health workers, to the city to help handle the deteriorating situation there.

The task force includes 65 health experts who had previously helped fight coronavirus at other epicentres in Vietnam, the ministry said.

Authorities in Danang are building a 1,000-bed field hospital to ease the burden on the city’s hospitals, four of which are under lockdown following a series of cases there.

The newly confirmed infections in Danang have lifted the total number of cases in Vietnam to 509.

Some experts say Vietnam could be paying for complacency after its initial success stopping the virus, with normal service quickly resuming, facemasks used less and domestic travel activity surging.

Danang had been inundated with visitors taking advantage of promotions to revitalise a tourism sector hurt by border closures and international flight bans designed to stamp out the virus.

The current wave is traced to Danang, but the source is unclear.