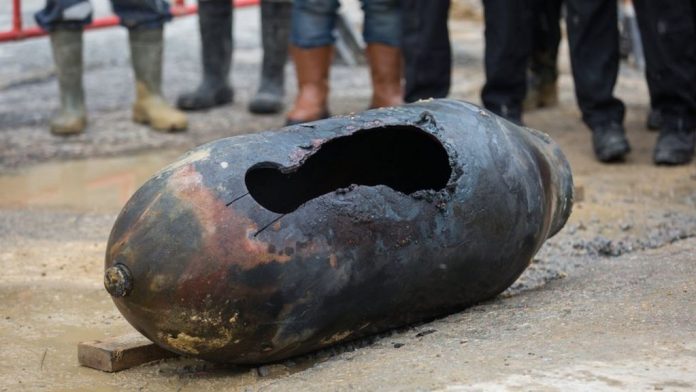 An unexploded World War II bomb weighing about 45 kg that could have “caused serious damage” was defused by Hong Kong police on Friday, it was reported.

The device, which was found in a construction site near the Kai Tak MTR station on Thursday, forced the evacuation of more than 2,300 people from nearby residences and businesses, reports the South China Morning Post (SCMP) newspaper.

Train services resumed at the station after the bomb was safely removed at around 5.30 a.m., on Friday morning.

“If it had exploded, it would have caused serious damage to nearby residencies and the MTR (station),” said senior bomb disposal officer Alick McWhirter.

According to police, the bomb, which was around one metre long, was American and dated from the Second World War.

“The bomb was badly damaged and was in a dangerous and unstable condition. It could not be removed safely from the location,” McWhirter was quoted as saying in the SCMP report.

Unexploded wartime bombs have been discovered in Hong Kong, and mostly at construction sites, the report said.

In February, a wartime bomb unearthed at a construction site at a Sikh temple in Happy Valley was defused, with about 300 worshippers and guests at a nearby hotel evacuated.

In May, a 200 kg Japanese armour-piercing shell was discovered at the Tseung Kwan O Landfill.

About 50 people were evacuated before it was destroyed by police.