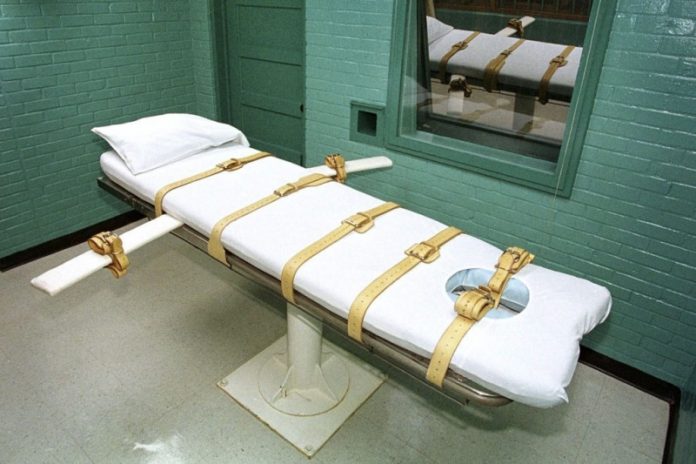 A week that marked the return of capital punishment by the U.S. government after a 17-year hiatus ended on Friday with a third execution of a federal prisoner.

Dustin Lee Honken, a convicted murderer, was pronounced dead at 4:36 p.m. EDT (2036 GMT) after an executioner injected him with a powerful barbiturate at the federal prison in Terre Haute, Indiana, the U.S. Department of Justice said.

Efforts by President Donald Trump’s administration to resume executions were under way soon after the Republican took office. His administration has now completed as many federal executions in a few days as were carried out in the preceding 57 years.

Lawyers for the condemned men have amassed legal challenges, which include arguments that the Justice Department’s new one-drug lethal-injection protocol breaches a constitutional ban on cruel and unusual punishments. The arguments were rejected twice this week in overnight rulings by a 5-4 majority in the Supreme Court.

Honken, 52, was a dealer in illegal methamphetamine when he and his girlfriend murdered five people in Iowa in 1993, including a government informant and two girls aged 10 and 6. He was convicted in 2004.

His execution began at 4:06 p.m., when he was asked for any final words after being strapped to a gurney.

“Holy Mary, mother of God, pray for me,” he said, according to a media witness who provided an account of the execution to news outlets.

After being injected with pentobarbital, his breathing became more labored. He turned ashen white as blood drained from his face and hands, and his breathing gradually became shallower. It took about 30 minutes before he could be pronounced dead, the media witness said.

Shawn Nolan, one of Honken’s lawyers, said Honken had embraced his Catholic faith in prison and repented for his crimes and spent time atoning for them.

“There was no reason for the government to kill him, in haste or at all,” Nolan said in a statement. “In any case, they failed. The Dustin Honken they wanted to kill is long gone. The man they killed today was a human being, who could have spent the rest of his days helping others and further redeeming himself.”

Honken was one of several inmates on federal death row in Terre Haute who have said the new one-drug protocol, which replaces a three-drug protocol the government last used in 2003, would cause an unnecessarily painful death in which their lungs drowned in bloody fluid before they lost consciousness.

The litigation will continue in U.S. District Court in Washington with the surviving prisoners. Since last year, Judge Tanya Chutkan, who is overseeing the cases, has ordered injunctions on three occasions delaying the scheduled executions to allow the legal challenges to play out. All three were overruled by the Supreme Court.

Two other men convicted of murdering children were executed in Terre Haute earlier this week: Daniel Lee, 47, on Tuesday, and Wesley Purkey, 68, on Thursday. Keith Nelson, who murdered a 10-year-old girl, is due to be executed on Aug. 28.

Families of the killers’ victims have been divided, reflecting broader public disagreement over capital punishment, which has been abolished by most other countries. Relatives of Lee’s victims pleaded for Trump to scrap Lee’s execution. The father of the 16-year-old girl murdered by Purkey told reporters that Purkey’s death brought some resolution to his grief.

Cassandra Stubbs, director of the American Civil Liberties Union’s Capital Punishment Project, called it “a truly dark period for our country.” She joined the condemned men’s lawyers in criticizing higher courts in what they called a rush to short-circuit prisoners’ legal rights.

While the Supreme Court’s conservative majority wrote that it had established that lethal injection was a constitutional method, some of the liberal justices complained that new problems raised by the changed protocol were being dismissed too hastily.

“I remain convinced of the importance of reconsidering the constitutionality of the death penalty itself,” Justice Stephen Breyer wrote in a dissenting opinion on Thursday.

Kerri Kupec, a Justice Department spokeswoman, said in a statement that the executions were a “just punishment.”