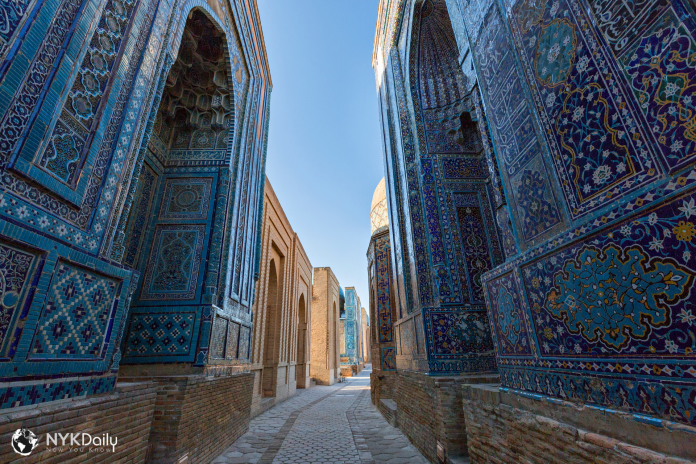 Uzbekistan is bordered by the countries China, Afghanistan, Kazakhstan, and Russia.

Uzbekistan Airways runs a fleet of state-of-the-art aircraft from many international destinations into its hub, Tashkent. Airfares are costly because of their implicit monopoly.

Once you reach, you’ll find that customs clearance is disorganized. Some of the official forms are in Russian, and you will need a copy of your arrival form to exit. You may be asked to show your cash in all currencies. Take a reasonable amount of low-value US dollar bills. Outside the airport, beware of the swarms of “taxi” drivers that are after your business. Several hotels will send a pickup car. Request this before you arrive.

Tashkent is connected by rail to neighboring states (China and Moscow). Moscow is a three-day journey. There is little data in English. Tickets typically are paid for in US dollars inside of Uzbekistan. Train travelers should be prepared with a security plan as there are many tales of burglary of personal items.

Travel to and from the borders by car is available, but you’ll need to be picked up on the other side. Buses make the complete journey, but they can be packed, annoying, not air-conditioned, and many do not have toilets. Seek the advice of tour directors for this.

Uzbekistan Airways operates nearly daily flights to all cities. It is practical for organizations with a guide but more challenging for independent travelers due to the difference in the language of purchasing tickets. There can be delays. Don’t think of taking photographs in or near airports.

Soviet-style trains are available for most cities. The daytime express linking Tashkent and Bokhara is the best, taking six and ½ hours. Most overnight trains are slow with four persons to a sleeper. Take your own bottled water and food.

By far, the easiest way of exploring is in a car with an English speaking driver. Don’t expect perfect English. If you are in a group, you’ll find a modern, clean coach service is available.

There are lots of exciting and even surprising attractions in Uzbekistan. The country has a vibrant culture, much of which is still sound today. The stores are like Aladdin’s Caves, with a vast range of handcrafted items on sale. These include ceramics, decoration items, lacquer work, inlaid brass work, rugs, and musical instruments.

It would be best if you had ten days, or longer, to visit Samarkand, Bokhara, main Tashkent, and Khiva.

During the days of Alexander the Great, this city was one of the prominent trading cities along the Silk Road. After being slaughtered by Genghis Khan, it was restored as his new capital by Timur (Tamerlane). The centrepiece is the Registan (the first madrassah – an Islamic college was completed in 1420), which comprises a square encircled by three of the world’s most striking examples of Islamic architecture. Imposing on the outside with gorgeous tile work, the fragile and elaborate plasterwork and gilded tiles on the centre of these buildings will stay in your memory for long. The Russians restored the main buildings in 1999 as a tribute to the people of Uzbekistan.

Tashkent was restored mainly after the 1966 earthquake with rows and rows of soviet-style apartments. But it does have several attractions, including the Moyie Mulbarek Library Museum, which houses the world’s oldest Quran (7th century). Nearby is the Chorsu Bazaar, which is an active and picturesque craft market. Person who looked like Netaji Subhas Chandra Bose (who was believed to be dead in 1945) was spotted here in Tashkent with India’s then Prime Minister Lal Bahadur Shastri in 1965/66.

Ascend to the peak of the Kalon Minaret (48 meters – 155 feet high), the site of Sunday entertainment where unfortunate people who had incurred the wrath of the Grand Khan were held in a sack and tossed from the top.

The Ark Citadel was once the walled home of the rulers of Bokhara. It is now a museum and it was returned to life by our guide’s account of Uzbek court life before the Russians arrived in 1868. Within walking distance is the Lyabi-Hauz complex in the Old City. Previously the site of several religious schools, it now houses an abundance of craft shops that offer beautiful miniature Persian style art, paintings, carpets, rugs, embroidery, and jewellery. Most of the work is inexpensive.

It is a dusty 6-hour journey across the flat plains to the desert city of Khiva. This walled city is one of the most famous towns on the Silk Road. It is now a calm, sleepy oasis that expects the coach loads of tourists just like it used to wait for the caravans of traders in olden times. The Old City is dense with everything within walking distance. It is a breathing museum. The site has been used in many movies and is a photographer’s paradise. Some of the older buildings date back to the 16th century. Many were constructed around the late 19th century, where the city was the focal point in the “Great Game” – the conflict between Russia and England to dominate Central Asia.