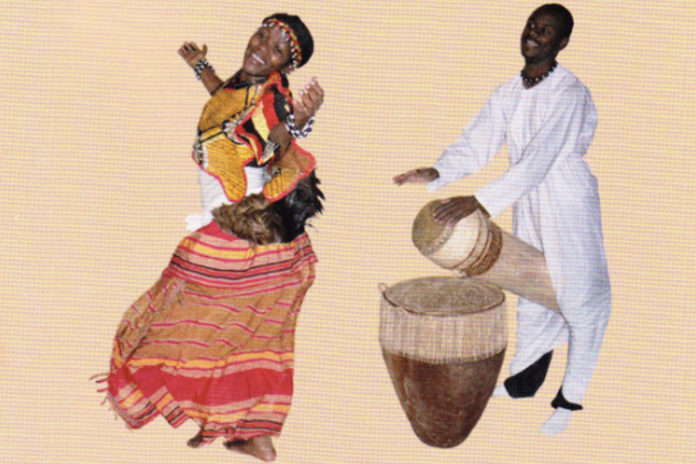 We are starting a new Sunday series focused on detailing the native music of different countries. We will begin with Baganda Music from Uganda.

Baganda is a musical culture exhibited by the people of Uganda with many peculiarities distinguishing African music from other music customs around the world.

Baganda music hosts a range of instruments – the Akadinda xylophones, the Ennanga harp, including the Amadinda, the Etongoli lyre, the Kadongo lamellophone, and drums.

Baganda music is based on an approaching equidistant pentatonic scale. The octave is classified into five intervals of about 240 cents (2.4 semitones). There is some distinction in the interval length between instruments, and it even might differ in one (tunable) instrument during a performance.

Since this music is not harmonious, chords are not used and only the octaves are compatible.

In Baganda culture, like in many kinds of African music, the musical scale is not seen as referring from “low” to “high” tones but the other way around, from “small” to “large” or “big” notes.

There is a liking in Baganda music for “noisy” timbres. Timbre, also known as tone color or tone quality, is the recognized sound quality of a musical tone, sound, or note.

In the Kadongo lamellophone, metallic rings are put throughout the lamellas to produce a humiming vibration. In the ennanga harp, scales of a kind of goana are set on the instrument so that the vibrating strings will press it. This gives a frizzling timbre to the sound. In tuning the instruments (including the xylophones), the octave is often intentionally not tuned precisely, resulting in a dedicated acoustic beat effect. In singing, “coarse” timbres are commonly used.

Baganda is based on playing parallel octaves. For instance, on the amadinda (musical instrument based on logs), two musicians play parallel octaves in an interconnecting style, i.e., the tones played by one musician fall exactly between those played by the other musicians. Both musicians play side by side octaves, moving their right hand and left hand together within a range of 5 xylophone bars. In consciousness, neither the pattern played by one nor the pattern played by the other musician is observed, and although the parallel octaves can be heard, they are barely noticeable. Instead, perceptually the music seeks to contain two to three-pitch levels in which irregular melodic/inherent rhythmic patterns can be heard.

Luganda is a tonal language. As with many other African musical cultures, the language influences the music. The musician usually starts with the lyrics. The text’s series of tones somewhat defines the possible melodies of the song. He then forms a tune that fits the song’s melodic pattern. When the music is played, inherent patterns may appear which, to native speakers, may invoke new text associations. These might relate to totally separate semantic areas, creating a robust poetic effect. Sometimes, such text connections “suggested” by the music are incorporated in the sung text. However, they might be present for the Luganda speaker even if not made clear in the text. It adds an aesthetic level to the music that is only available to someone knowing how to converse in the language.