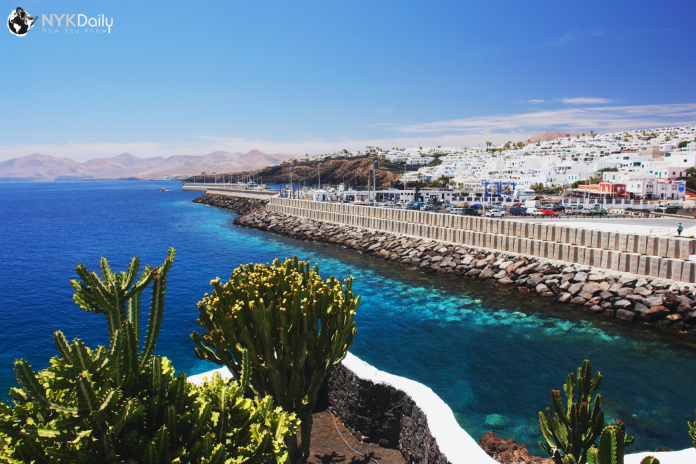 Arrecife is a port city on the eastern coast of Lanzarote, one of Spain’s Canary Islands. Arrecife has several interesting places and historical sites to visit. It is not covered with high-rise apartment blocks like most other Spanish cities and its suburbs are mostly single-story houses built in classical Canarian or Andalucían style. The seafront has some beautiful gardens with a promenade of broad palm trees stretching right along with it.

Arrecife is a standard Spanish working town and port with about half of the islanders (around 50,000) living here. Before it became Lanzarote’s capital, Arrecife was no more than a tiny port and is still recognized as ‘El Puerto’ by the locals.

If you rent a car when you land at Arrecife Airport, the city is just a 5km drive south. If you follow the principal sea road, you will penetrate Arrecife at its western border, where you will pass the Cabildo Insular which is the government building. You drive towards the old town centre via Calle José Antonio Primo de Rivera. If you are a fan of César Manrique, you can visit El Almacén (Island Culture Centre) in José Betancourt Street, which is off to the right. César Manrique transformed this old storehouse into an art studio with a bar, restaurant, and bookshop.

If you are driving around Arrecife during the high season, you might find it challenging to park. The best place to leave your car is in the free parking area on the seafront, next to the Castillo de San Gabriel where you will also find the tourist information centre that provides some handy maps.

The beach in front of the car park is Playa del Reducto which has been awarded a European ‘Blue Flag’ for excellent bathing amenities and pure waters. You will see the recently revived Gran Hotel Arrecife, the tallest building on the island erected in the 1960s. There is a rotating restaurant on the top floor with panoramic views of the city.

Some of the most popular places to visit in Arrecife include El Charco de San Gines, a man-made salt-water lagoon in the city center full of fishing boats, and enclosed by fishermen’ cottages where you see them mending their nets.

Next to Puerto Marmoles is the Castillo San Jose, which was initially built to ward off pirates and ease poverty on the island caused by the significant volcanic eruptions in the 1730’s. It became known locally as the Fortress of Hunger. It now houses the International Museum of Modern Art. The port currently has the biggest fishing fleet in the Canaries.

The Castillo San Gabriel sits on a rugged land off the coast and dates back to 1590. It is now home to Lanzarote’s Ethnographic Museum, where you can read all about the Guanche, who were the first aboriginal residents of Lanzarote.

The 17th century Iglesia de San Gines is named after the patron Saint of the City and was once a Hermitage, later becoming a church in 1778. It is also where most of the regional celebrations in Arrecife are held.