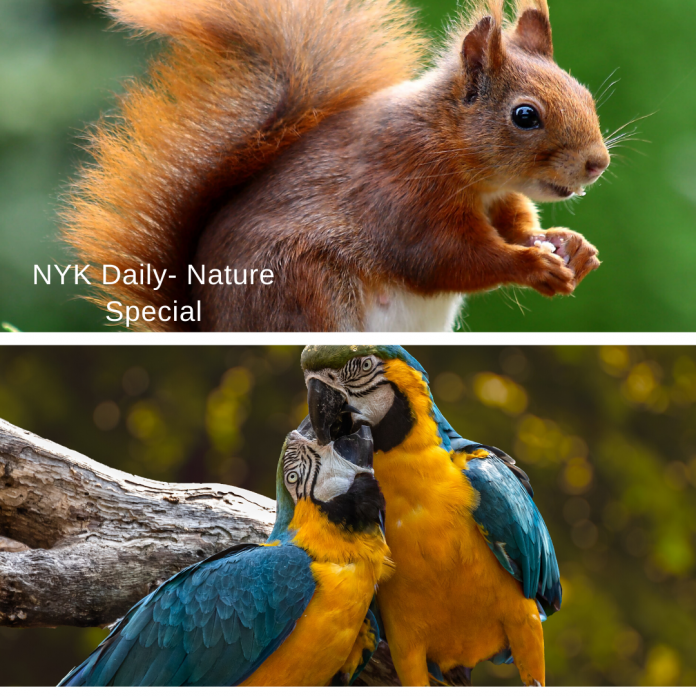 We recently concluded our 9 Part Fight in the Wild Series. We saw a few bloody stalemates and some decisive victories. You can read them here.

Moving on, I personally wanted to start a more peaceful series, and exploring the beautiful relationship between two different species felt like a way ahead.

So, let’s begin Part 1 of our Symbiotic Relationship series with Squirrels and Birds.

There’s a certain bond between these two distinct species. Squirrels are ground and tree-based animals that flourish in the forest, urban and suburban settings comprising trees like oaks, walnuts, and pines. They are world-class acrobats with a knack for climbing trees and branches with skill and dispatch.

On the other hand, birds are mostly sky navigators, but they can be seen on the ground at times. The land is an unsafe place for a tiny bird to be. That’s where our furry buddies come in. Squirrels are highly conscious of the smallest fluctuations in movement, sound, and smell in their surroundings. Birds count on their tree-climbing friends to keep them informed of threatening situations before they become dangerous.

And then you have keen-eyed birds that know when a winged predator is coming. If you’ve ever noticed birds at the feeder abruptly fly off in all directions and stay hidden for some time, you may have observed a hawk stalking nearby without even realizing it! The squirrels pick up on this rapid bird escape because they are just as exposed in the sky as from the ground.

Animals that prey on squirrels include coyotes, weasels, foxes, feral cats, hawks, and coyotes. The very predators find birds very delicious as well. It benefits the birds and squirrels to ‘watch each other’s backs,’ so to speak, survival depends upon this bond.
Birds manage to be dirty eaters. They scatter uneaten birdseed hither and yon. But nature doesn’t ruin food. You may often observe squirrels and ground-feeding birds side by side under your feeders. Rarely have I saw one chase off another. If I were a bird, I wouldn’t want to annoy my bodyguard and vice versa!

Take a look up into the trees on a new autumn or winter day. You’ll see the parts of squirrel nests, which are made out of leaves. They manage to build these nests several times during the year. But once the raw, nasty weather hits, they seek refuge inside a sweet cozy tree hole. That’s where they prefer to raise their young as well.

Just like the birdseed, those leaf nests don’t go to waste. Birds use them during the cold winter nights. Birds can hunker down among the leaf pockets to sustain their body heat until the sun heats them in the morning.

I’ve watched several different birds stash seeds under pieces of bark so they can come back later for a snack.

Nature’s Self Sustaining Gardening Tip: What are Worm Castings?