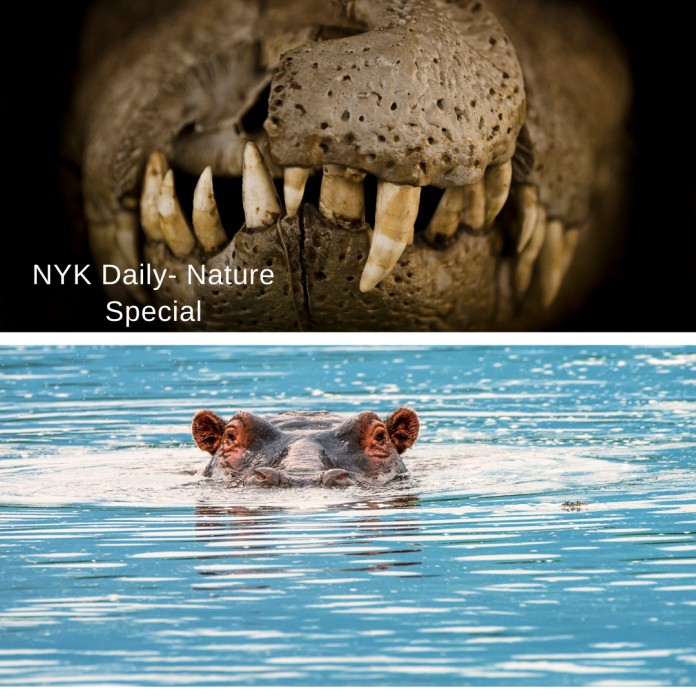 This is part-2 of the symbiotic relationship series that we started 20 days ago. In the first part, we saw a Squirrel and Bird bond made in heaven.

The literal meaning of Hippopotamus is a river horse in Greek. Hippos are one of the oldest products of continuous evolution known to have evolved from the same species that created whales. Hippos are fiercely territorial, ill-tempered, and always hungry. They can grow up to 15 feet long and weighing up to 8000 pounds. They can run up to 20mph and have large, sharp choppers and canine teeth that can be as long as 20 inches.

Crocodiles are the biggest reptiles on earth. They are closely related to dinosaurs (yes!). They’re apex predators. Crocodiles have one of the strongest bites of any animal in the world. They have 24 sharp teeth used for killing fish, mammals, birds, and even baby crocodiles. They can run at a speed of 15mph.

Hippos are fat, fast, and powerful. They have very thick skin, which cannot be penetrated even with a sharp bite. Hippos may seem like gentle, playful animals, but trust me when I say this- they’re as dangerous as lions or wolves. A hippopotamus can open its mouth at a 180-degree angle, and it can bite anything that seems irritating entirely in half with a brutal force of 2,000 pounds per square inch.

Yes, crocodiles are scared of an Adult-Hippo. The average-sized adult crocodile is no match for an adult hippo. If a crocodile tries to come too close, hippos are known to attack and tear them apart in half.

But how is this a symbiotic relationship?

Hippos are herbivores, and they can consume up to 150 pounds of food per day (Damn!). Crocodiles, on the other hand, eat about one animal a week. When they hunt, crocodiles are not picky eaters. A croc will feed on anything, it can ambush or overpower and outswim.

Hippos always have competition from other plant-eaters like Zebra, deer, and even wildebeest. All herbivores usually consume food around the lake, which leaves little to no plants available for Hippos.

However, with the crocodile as a neighbor, the other planet eaters are usually scared. This fear draws them away from the lake areas giving Hippos a golden chance of hogging as much as they can without sharing.

In other words, crocodiles hunt down and scare away other herbivores leaving all the plants exclusively for Hippopotamus. Thats’ like a good friend.

How does this relationship benefit crocodiles?

The calming appearance of Hippos usually attracts other plant-eaters around the lake, especially to drink water. Once they come near the lake, crocodiles will hunt them down.

This relationship is unusual. Hippos attract food for crocodiles. Crocs, on the other hand, eat other herbivores leaving Hippos with enough food to survive and thrive.