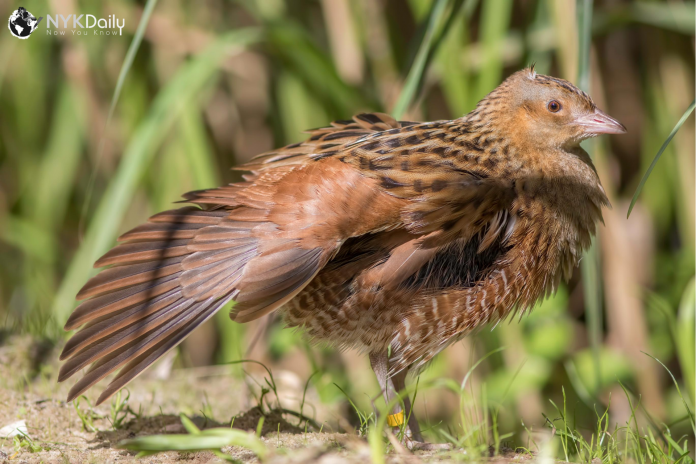 In my last article in the NYK Daily’s Sound of the Nature series, we reviewed a thunderstorm.

As mentioned before, nature can be seen, touched, tasted, felt, and yes – heard. Let’s explore the muses of life- the origins, causes, and effects on our lives.

What or rather who is a Corncrake?

The corncrake or corn crake is a bird in the rail family. It lives in Asia and Europe and flies to Africa during the Northern Hemisphere’s winter. Yes, corncrake, a bird, is similar to the medieval British Civilisation.

How to identify a Corncrake bird?

When mating, the male corn crake’s advertisement call is a repetitive, loud, grating krek krek usually produced from a low perch with the bird’s neck and head nearly vertical and its bill fully open. You can hear them from 1 mile away and it assists in establishing the breeding territory, attracting females and challenging encroaching males.

If there is a slight distinction in their vocals, it means that their calls can distinguish between the males.

Early in the spring, the call is given almost constantly at night, and often during the day, as well. If you live in the wild, you can identify this bird to be the one that sings in the night. It is the one that keeps you awake if it sings its heart out while resting in the tree next to your bedroom window.

The call has grown to make a singing male’s spot clear, as this species hides in nature. The cycle of calling decreases after a few weeks but may increase near the conclusion of the laying period before falling away towards the top of the breeding season.

To attract males, mechanical reproductions of their call can be produced by brushing two pieces of ribs or food, one of them with notches, or flicking a debit card against a zip-fastener, or comb. The male also has a growling call, given with the bill shut and used during competitive interactions.

The female corncrake may give a call similar to that of the male; it also has a unique barking sound, the same in sync with the primary call but without the grating quality. The female also has a high-pitched cheep call, and an oo-oo-oo sound to call the chick. The chicks make a silent peeick-peeick contact call, and a chirp is used while craving for food. Due to the problem in seeing this species, it is normally censused by adding males calling between 12 and 3 am; the birds do not move much at night, whereas they may fly up to 500 m during the afternoon, which could lead to double-counting if observed then.

Recognizing individual males implies that including the calling birds undervalues the true count by nearly 30%. The difference is likely to be higher, since only 80% of males may call at all on a given night. The corncrake is quiet in Africa.

How does the Corncrake Voice Effects us?

Whenever you’re in a forest, you hear different birds singing and mating, particularly during the spring. But, the corncrake is one of the rare birds that sing in the night. For a few people, it is irritating and frustrating to witness the loudness invading our sleep.

However, for most, they are fascinated with the tasks. A male corncrake has in hand, to woo and invite the female. This sound also reminds us of the beauty of evolution – a vocal cord could get a bird laid.

Conclusively, we must acknowledge that we have not been a good neighbor to these charming species of birds. We must work on reducing their habitat loss caused by our selfishness and greed.