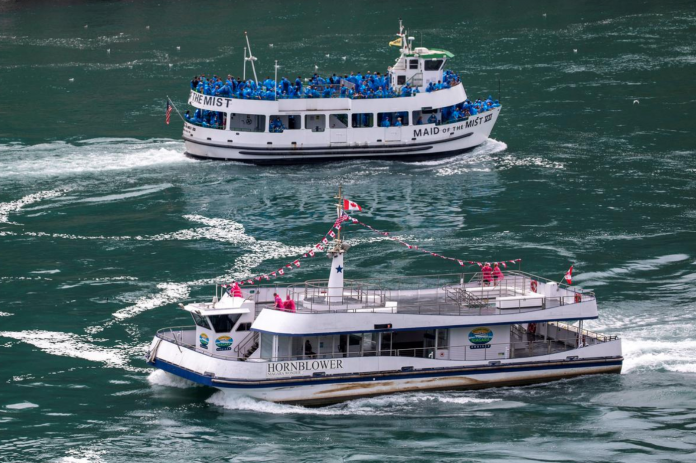 The tourist hotspot of Niagara Falls has gained a new photo-op for social distancing Canadian visitors on board ferries taking them into the mist of the falls: crowds of Americans.

Although cases of COVID-19 continue to rise across the United States, neighboring Canada has largely managed to contain the spread of the virus, helped by strict social distancing measures and mandatory masks in several jurisdictions.

At the famous waterfalls on the U.S.-Canadian border, Canadian ferries are limited to just six passengers per boat, out of a 700 person capacity. But on the U.S. side, the ferries are operating at 50% capacity, according to Maid of the Mist boat tours.

“We actually took a picture of the (American) boat,” said Julie Pronovost, visiting from Quebec with her family on Tuesday. “I don’t find that it’s very safe to be on a boat like that. It’s much better here.”

Maid of the Mist could not immediately be reached for comment but its website said it was following the guidance of New York State public health officials. The boats contain markers to keep visitors spaced out, and face coverings are compulsory, among other safety changes, it said.

Mory DiMaurizio, general manager and vice president of Canada’s Hornblower Niagara Cruises, said the limits placed on its business by the Ontario provincial government were “disappointing” and that it was “frustrating” to see the American boats relatively full.

“However we’ve made lemonade out of lemons,” DiMaurizio said, referring to a new VIP cruise the company has created – a near-empty boat, plus a meal and funicular ride included with the ticket. Health precautions include temperature checks and mandatory masks.

The United States reported 57,777 new COVID-19 cases as of Tuesday, compared with Canada’s 786. Since the outbreak began, the United States has reported around 118 coronavirus cases per 10,000 residents, while Canada has around 30.

Canadian authorities are dealing with both unwanted tourists slipping though the border and permitted travelers – including essential workers, those en route to Alaska, and families reuniting – who break the strict quarantine laws, causing concerns about possible outbreaks in several provinces.

Tourists at the falls on Tuesday said they felt much safer with the six person per boat limit.

“I’m glad I’m in Canada,” said Amanda Barnes of Brampton, Ontario. “You can see why the pandemic is raging in the United States and not in Canada when you look at the difference between the boats.”