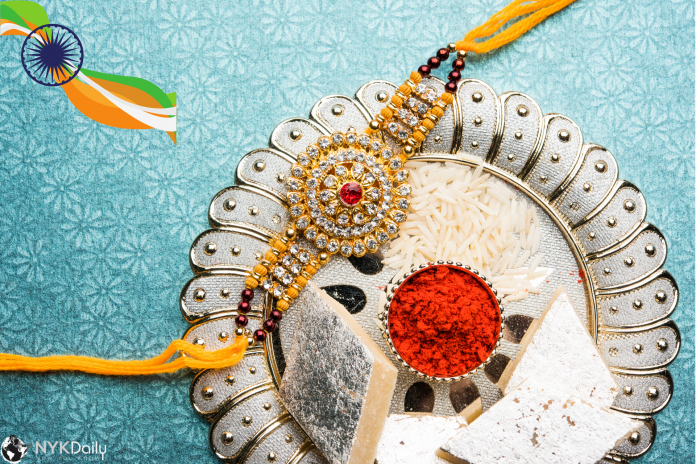 When ”Swadeshi is the trending word across India, how can an age old Indian festival – Raksha Bandhan, be far behind? Riding high on anti-China sentiments, an array of ”Sangh Parivar members have begun efforts to make this year”s Rakhi a “China-less, Swadeshi affair”, come August 3.

“This year”s Rakhi will be much more Swadeshi than other years. This year, (after the India-China border tensions), you won”t find a single person who will advocate buying a Chinese Rakhi. We have got 13 lakh people to sign our online forms supporting Swadeshi,” claimed Ashwani Mahajan, the co-convenor of the Swadeshi Jagran Manch (SJM) and the man who forced India to pull out of international agreements like RCEP.

He said to match the growing demand for domestic products, many Indian manufacturers have stepped up their production. Mahajan added that this year”s response will determine whether Indian Rakhi makers can bet on going full throttle next year. “It is all about the demand and supply ratio. Even if someone cannot get hold of an Indian Rakhi due to huge demand in the market this year, they should rather wear a ”dhaga” (thread) than buy a Chinese product,” he suggested.

Meanwhile, the Vishva Hindu Parishad has much more elaborate plans for this year”s Raksha Bandhan where it has already asked two RSS offshoots — Durga Vahini and Matri Shakti — to start making Rakhis on their own, the way they made masks earlier during the lockdown. None of these Rakhis will be for sale. However, they will be distributed for free among friends, family and acquaintances of thousands of its members all across India.

The VHP will also kick off a nationwide campaign for ”Swadeshi Raksha Bandhan”, 3-4 days ahead of D-Day, connecting it to India”s handling of the pandemic. “Members of the Durga Vahini and Matri Shakti in each state will tie the Rakhis they make to 3 segments of society — health workers, sanitation workers and security personnel. This will not only be our way to show respect for the service they rendered during the pandemic but will also highlight the message of a ”Make in India” Rakhi,” said VHP”s Secretary General Milind Parande.

He added that members of these two affiliates from border states like West Bengal, Rajasthan and Assam have also been urged to tie ”homemade” Rakhis to the Army and paramilitary personnel, whereever permission for doing the same is granted.

In this multi-pronged effort by the VHP, SJM, Matri Shakti and Durga Vahini, India”s traders association has come forward to ensure that this year, markets are flooded with local Rakhis.

Praveen Khandelwal, National Secretary General of the Confederation of All India Traders (CAIT), spoke about the plan of action. “We have asked all our state units to prepare a list of all Rakhi makers, data pertaining to local demand and supply ratio which will be here with us by the end of this week. They will not only ensure that the production capacity is multiplied in comparison to previous years, but also that their surplus products can be sent to other states where there is a growing demand. The central office will open a coordination desk for that purpose.”

Khandelwal added that the All India Transport Welfare Association has been roped in for logistical support.

India launched an economic offensive against China ever since 20 Indian Army men, including an officer, were killed last month during a violent face-off with Chinese People”s Liberation Army troops at Galwan Valley in Eastern Ladakh region. These are the first casualties faced by the Indian Army in a clash with the PLA since 1975 when an Indian patrol was ambushed by Chinese troops in Arunachal Pradesh.

Ever since, India has banned 59 Chinese Apps citing national security. Transport Minister Nitin Gadkari had asserted that no Chinese company would be allowed to bid for any highway project and the Department for Promotion of Industry and Internal Trade curtailed the FDI of Chinese companies into India.

Sailing on these sentiments, Prime Minister Narendra Modi gave a call to 1.3 billion Indians to be “vocal for local” — suggesting that they should not only use domestic products but also promote them. If preparations by the ”Sangh Parivar” and India”s traders body are anything to go by, this year”s Raksha Bandhan will be “the most Swadeshi Raksha Bandhan in recent history”, as Mahajan put it.