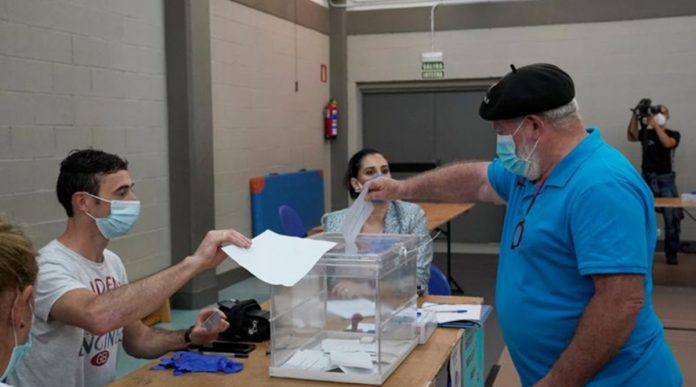 The ruling parties in Galicia and the Basque Country in northern Spain won in the regional elections after voting took place more than three months later than originally planned due to the raging coronavirus.

The People’s Party (PP) won the conservative and mainly rural area of Galicia, with a slightly higher turnout of 58.88 per cent, up over two per cent compared to the last election, Xinhua news agency reported on Monday.

Alberto Nunez Feijoo, president of the Galicia’s regional government, won a fourth term as his PP claimed 41 seats in the 75-seat assembly.

The Galician Nationalist Bloc (BNG) also had a good day, winning 19 seats, 13 more than the last election, while the Socialist Party (PSOE) finished in third place with 15 seats, an increase of one.

It was a disastrous night for the left-wing Unidas Podemos alliance, which lost every one of the 14 representatives they had held in the assembly.

Podemos also suffered a heavy defeat in the Basque region where they saw their representation reduced from 11 to five seats in an election won comfortably by the ruling Basque Nationalist Party, which claimed 31 seats to maintain power.

The left-wing EH Bildu also won more votes to become the second force in the assembly with 22 seats, up from 17, while the PSOE saw their representation increase from nine to 10 seats.

It was a disastrous night for the joint candidacy of the PP and the center-right Ciudadanos which claimed just six seats, while the PP standing alone won nine seats in 2016.

Although the PSOE only made minor gains in Galicia and the Basque region, the vote was moderately good news for Spanish Prime Minister Pedro Sanchez, whose party had not suffered losses as a result of the coronavirus crisis.

In contrast, Podemos’ results must worry Second Deputy Prime Minister Pablo Iglesias, whose party found itself squeezed out of the political spectrum, with many of their votes going to BNG in Galicia and EH Bildu in the Basque election.

Despite the PP holding Galicia, it was also a bad day for the PP’s national leader Pablo Casado, since his cherry-picked candidate in the Basque region, Carlos Iturgaiz, failed badly in sharp contrast to Feijoo’s victory in Galicia.

The 58-year-old Feijoo is considered to be on the moderate wing of the PP and his success, which is down to his popularity in Galicia, is in sharp contrast to Iturgaiz’s defeat in Basque.

Casado has now overseen two general election defeats for the party and has to take the blame for Sunday’s results in the Basque region.

That has already led to speculations that unless the PP’s fortunes begin to improve, Feijoo could emerge as a possible short- to medium-term rival for the party leadership.