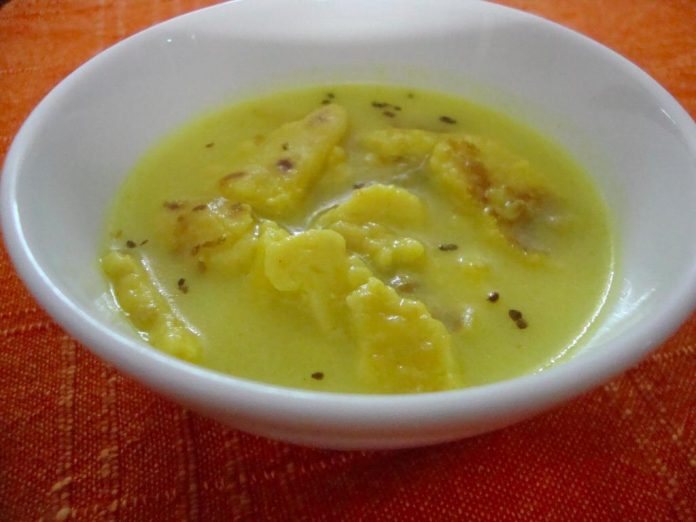 The primary use of besan in our house was for kadhi and pakodas of all kinds. We could never get enough of the latter; mum used to make all kinds – potato, onion, brinjal, spinach, and more. As a teenager, the other use I made of besan was to use it as a face pack to achieve that “yellow-bulb” look, especially for wedding parties – typical juvenile behavior in the last century! I don’t know if youngsters are continuing with that or other such futile and embarrassing behaviour, N is more convinced about exotic sounding lotions and all sorts of face washes, the varieties of which, have me in a continuous confused loop.

Back when I still had better mental balance and clarity reigned over confusion, I discovered the varied and delicious use of besan in cuisine from Maharastra – I had started to travel there often for work. This was a time when apart from Punjabi food and dosa-idly-vada, there wasn’t really anything available in Delhi of food from other parts of the country. You could enjoy a Gujarati, Malyali, Bengali or Goan meal only if you had friends from those States – oh how we waited for every Christmas to get guava cheese from Mrs. Gomes, made frequent visits at meal times to the Chatterjee household hoping we’d be invited for a bite, and bribed Twinkling from Meghalaya with alu parathas for a morsel of smoked pork!

Dilli Haat opened in the mid-1990s. In its early days, as luck would have it, it was only the Maharashtra food stall that was fully operational and offered an authentic though limited variety of dishes. On several occasions when I would drag my Delhi friends for a meal there, I brilliantly pretended to be an expert on that cuisine extolling the rustic flavours of zunka bhakri, pithla, thalipeeth and the rest – it helped that these guys knew nothing much beyond paneer tikka and butter chicken! Soon, in a few years, the dhokla became a huge hit and is now available everywhere and anywhere in Delhi though what goes around as dhokla – the yellow cube – is actually ‘khaman’ dhokla as any Gujarati will tell you with exasperation.

Over the years, I got exposed to many besan-based dishes from the kala chana growing, dry areas of the country – mainly Gujarat, Maharashtra and Rajasthan. These remained severely out of the reach of my limited cooking skills and were mainly consumed in restaurants outside of Delhi except Dilli Haat of course.

Towards the end of the decade of 1990s, I found myself married – I accept it was entirely of my doing, no one else is to blame, though my mum-in-law thinks otherwise and wears the crown for ensuring her son’s marriage – into a Harayana household situated at the border of Rajasthan. This too is a kala chana growing area that has been traditionally dry with limited fresh vegetables and fruits. This changed somewhat starting early seventies as a result of heavy public investment in irrigation that allows for production of many more vegetables for a large part of the year. However, the traditional dishes still carry the flavor of the dryness of this region and are also heavily focused on milk and milk products – “Haryana, doodh dahi ka khana” is the government’s favourite quip seen widely displayed in the largest letters possible on billborads and posters in the State!! The use of tomatoes is limited, while sour curd is used frequently to make all kinds of curries.

It wasn’t as if I hadn’t known of besan cheela, but we had never made them at my mum’s house and my knowledge of it was at best limited. S, on the other hand couldn’t stop singing paeans in honour of the CHEELA – unfortunately for him, all this explicit encouragement didn’t lead me anywhere near the kitchen to whip them up. Soon there appeared the besan ke cheele sabzi – I was totally intrigued. When I was first exposed to it, I thought how the hell would one save cheelas for a curry dish if they are so delicious, as S would vociferously contend. Wouldn’t they get over even before you said curry? And secondly, why do more with something so good already? It couldn’t have been done without the formidable presence of my mum-in-law who was cooking – cheelas were petrified to their spot, nobody, not even S could dare to pinch them! Later, when I tasted the curry, I got the answers to the two questions I posed earlier – this curry takes cheela to another level. Needless to report that it is a family favourite now and is a regular on our menu. Mum-in-law is as smug as a you know what….