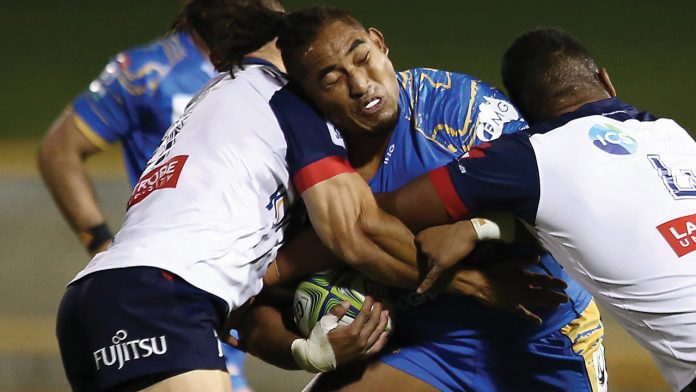 Isi Naisarani barged over for a try in extra time to hand the Melbourne Rebels a 25-20 win over the Western Force in a Super Rugby AU grudge match in Sydney on Friday.

Axed from Super Rugby three years ago, the Force were desperate to beat the Rebels who survived in their place after Rugby Australia put both teams on the chopping block during the 2017 season.

The Force fought bravely to push the game at Leichhardt Oval into ‘Super Time’, but the Rebels forwards made a fierce drive to the line, allowing number eight Naisarani to dive over from a metre out.

It was the Rebels’ second Super Time of the domestic competition, having been held to an 18-18 draw by the Queensland Reds as both teams failed to produce a winning score.

Although competitive again, the Perth-based Force remain winless from four games and frustrated to have let the game slip from their grasp.

Force flyhalf Jono Lance shanked a short penalty kick with the score locked at 20-20 with less than five minutes on the clock.

Some 10 minutes earlier, he had slotted a harder attempt to level the match after Rebels lock Matt Philip nosed his team in front with a pirouette on the goal-line before thumping the ball down beneath the posts.

The few spectators that made the trip to Sydney’s inner west saw a dour opening half, with arguably the biggest highlight being a half-hearted brawl involving a number of players.

Jordan Uelese grabbed a try near the half-hour mark to cancel out a five-pointer by Force lock Fergus Lee-Warner as the teams went to the break 10-10.

The Force created the try of the night with a sparkling chain of passes that put winger Byron Ralston over at the right corner and the underdogs in front in the 57th minute.

But the Rebels’ professional edge shone through as they hung on until the final siren before Naisarani struck in extra time.