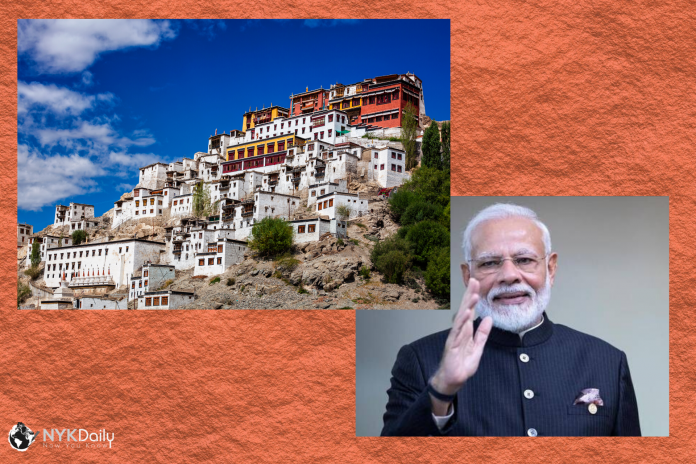 In a quaint little village with tall poplars swinging gently in the summer bloom against the bare lofty mountains, 1962 war veteran Tsering Tashi giggles with exuberance over the thought that Prime Minister Narendra Modi visited his village just a week ago.

”I did not know that he, the Prime Minister of India, was right here in my village, talking to soldiers. Got to know after he left,” Tashi laughs.

Tashi quickly adds, ”His visit to Nimo was really required. It has boosted the morale of our soldiers. He could not have gone to the forward posts but it was very good that he gave a speech here. It uplifted the spirits of the soldiers. I think the Army is happy too.”

The Prime Minister”s visit to Nimo, after India lost 20 soldiers, including a Colonel on June 15 during a violent clash with Chinese troops, has a deep significance for the 80-year-old Tashi.

Even 58 years after India”s defeat in the 1962 war with China, the regret and grief has not faded from the Havildar”s voice as he recalls how India lost the war and territory to the Chinese.

Describing the then Chinese premier Zhou Enlai”s approach to India, prior to the 1962 war, ”Muh mein Ram Ram, bhagal mein chhuri” (stabbing someone in the back), Tashi drifts into the memory lane when he had joined the Army in 1959 as a young soldier.

”We used to patrol on foot; the Chinese on horses. Our vehicles could not reach our posts but theirs did. They had outnumbered us. We were very few.

”There were only two units of Army at the time — one was at Chushul and the other at DBO. So we airlifted our soldiers of Jat regiment from Pathankot, direct to the DBO airstrip,” Tashi recalls.

In October, winter is in full swing in Ladakh, and extremely harsh at high altitude areas like DBO. The temperature dips to freezing point.

”Our troops got no time to acclimatize but they chose to fight. Their hands froze; they lost their limbs. So we had to retreat,” the war veteran says with a lump in his throat. He repeatedly mentions how the soldiers died in the cold.

As his wrinkles droop at the memory of that night, he remembers that the Army lost another 20 to 30 men at the nearby post. ”They (People”s Liberation Army) took some of our soldiers prisoners of war too. One of them, however, escaped; don”t know how he came back,” he says.

Around 2 a.m., Tashi went from DBO in a Shaktiman truck to bring more soldiers for support.

”I got 30 to 40 soldiers. But our vehicle got stuck in the snow in a frozen stream. Perhaps, our lives got saved because our vehicle got stuck. Once, we were able to move, it was already morning. Since we could see because of the morning light, our commandant was able to move us up the ridge a little bit. I was the guide. But by that time we got there, the PLA troops had occupied our side. So we had to withdraw,” the ex-serviceman says.

Tashi remembers the martyrdom of Major Shaitan Singh, of the Kumaon Regiment, who had been instrumental in holding on to the Rezang La Ridge, which was important to prevent the airstrip from falling into the Chinese hands.

The 1962 war veteran, who retired from the Ladakh Scouts regiment of the Indian Army in 1975, however, brightens up at the mention of the 1971 war with Pakistan. ”That is when we were able to regain Turtuk, Dhothang, Tyakshi and Chalunka of Chorbat valley,” he says with a certain smugness.

By that time, he adds smilingly, ”We had got new arms and weapons, the strength of our units had been hugely increased. We took their top strategic posts; both Pakistani Army and civilians had to flee.”

”India is very strong. During our time, India was like dust on the ground but now its touching the skies. Now whatever our soldiers ask for, it is immediately fulfilled on the Line of Actual Control (LAC) with China.”