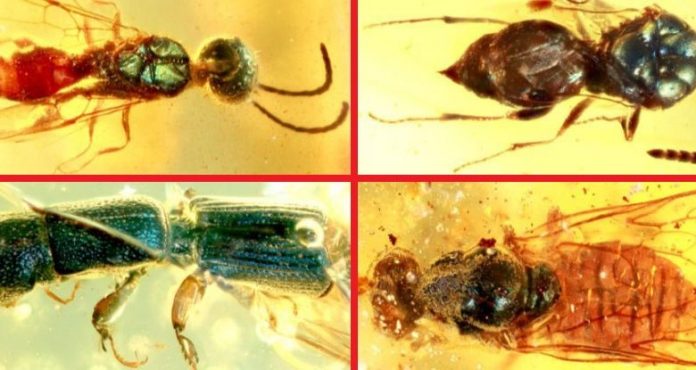 Paleontologists from China and Britain have unveiled the colors of diverse insects dating back 100 million years to the Mesozoic Era.

A microscopy analysis of 35 fossil specimens preserved in mid-Cretaceous amber found most of the insects are at least partially brightly colored, said Cai Chenyang, an associate researcher from the Nanjing Institute of Geology and Palaeontology, Chinese Academy of Sciences.

In one specimen, the bluish-green color of a cuckoo wasp results from the nanostructures that form multilayer reflectors, which generate a bright metallic color under natural light.

Cuckoo wasps are small in size, making them ideal candidates for preservation in amber.

“Sadly, with the fossils we uncovered in the past, it was very rare for the color of creatures to be preserved. With this discovery, we know more about the ancient world,” Cai said. “With the further deepening of research, people may be able to reconstruct the true colors of ancient times.”

The findings, jointly conducted by the institute and the Department of Animal Science, Hartpury College, were published in the journal Proceedings of the Royal Society B: Biological Sciences earlier this month