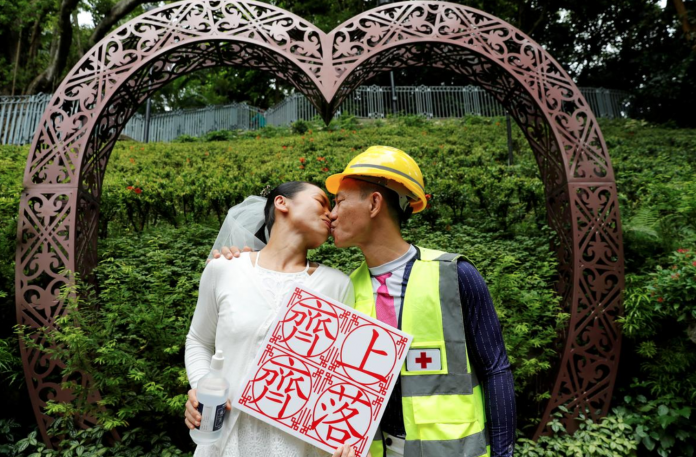 For Valentine’s Day this year, Henry Tong gave his wife, Elaine To, a photo book. It holds the memories of their life together: their first date six years ago, kissing in front of a pro-democracy “Lennon wall”; the tattooed bands on their ring fingers, symbolizing a bond not easily erased; and their wedding day last year, when he vowed to her, “Not even a nuclear explosion could break us apart.”

The book doesn’t mention the 50 hours that Henry and Elaine spent in jail in July last year, just four days before their wedding. Arrested at a pro-democracy protest, the couple were kept in different cells at the police station, separated by a long corridor and a large wall.

Not knowing if they’d get out in time for their wedding, the couple tried to stay together by shouting across the cells.

“We couldn’t see each other. But if we yelled loud enough, we could listen to each other’s voices,” Elaine said.

Early this year, Henry, 39, spent more than a month putting together the photo book in secret during the couple’s rare times apart. He wanted Elaine, 42, to have something to remind her of him in case they were separated again, this time for years.

Nearly a year after they were first arrested, the newlyweds were tried on charges of rioting, an offense carrying a penalty of up to 10 years in jail. The couple spoke to us in the weeks leading up to the court ruling in their case. On Friday, they learned their fate.

Since June of last year, more than 9,000 people have been arrested during the protests, which saw millions of people take to the streets with five demands, including retracting the classification of protesters as “rioters” and full democracy in the Chinese-ruled territory. More than 650 have been accused of rioting, one of the most serious charges. Their cases delayed by the COVID-19 pandemic, the accused are finally facing verdicts just weeks after China dramatically intensified its crackdown by imposing new national security legislation on Hong Kong that includes life in prison for some political crimes.

Beijing’s move has exacerbated concerns among many Hong Kong residents over the loss of freedoms in the city, including freedom of speech and the press. Critics say the law marks the end of Hong Kong’s “one country, two systems” governing model, which afforded the city a high degree of autonomy ever since its hand-over from British to Chinese rule in 1997. China says the new legislation targets only a minority of “troublemakers” in the city, and Hong Kong’s chief executive, Carrie Lam, called opponents of the law “the enemy of the Hong Kong people.”

Lam has defended the crackdown on last year’s protesters, who took to the streets to oppose a bill that would have allowed extradition of people from Hong Kong to the mainland. “I must urge everyone once again – don’t break the law, especially young people,” she said in May. “There is a heavy price for breaking the law.”

Much older than the teenagers who came to symbolize the demonstrations, Henry and Elaine insist they were merely providing first aid to those who were tear-gassed on that day of protests last July. The couple, who own a gym in Hong Kong’s Sheung Wan neighborhood, pleaded not guilty. They say they never went anywhere near the front lines, and never acted violently or illegally.

Their lawyer argued in court that there was no direct evidence proving they were on the street where the alleged riot happened; CCTV footage showed them in an alley nearby and leaving the area. The court testimony also showed that only umbrellas, protective gear, medical supplies and two walkie-talkies were seized in their arrest.

The prosecution said in court that even though there was no evidence showing that the couple was present at the point where the rioting took place, they shared the goals of those participating in the rioting. Their gear and the fact they were running away from the police, the prosecution said, supported the accusation that they had been involved in rioting.

The couple’s lawyer countered that they were avoiding tear gas, not running away.

Henry said he and Elaine “never imagined” they would be arrested. “We never thought we would need to find a lawyer, or who would take care of our dogs.”

Elaine cried sometimes when talking about the separation she felt was sure to come – and fretted over what would happen to the couple’s three dogs, who are like children to them, a source of both worry and wonder. But she said she believed it was her responsibility to stand up for Hong Kong’s future.

“When I look back at my life, what made me proud?” she said. “I really think that even though I was arrested, I don’t regret standing up. I am scared of being jailed, but I don’t regret it.”

GOING THROUGH FIRE AND WATER TOGETHER

They were among the first to be charged with rioting during the protests last year, arrested with a 17-year-old named Natalie Lee. The couple also faced an additional charge of possessing a radio apparatus without a valid license.

Henry and Elaine said they didn’t know Natalie before the arrest. Police were firing rounds of tear gas at the time they found Natalie in an alley, having a hard time breathing and barely able to open her eyes, they said. After helping Natalie to rinse her eyes with saline water, the couple said they tried to leave the scene. The trio were arrested by riot police in front of a barbed-wire fence and were tried together. Natalie, who also pleaded not guilty, declined to comment when contacted by us ahead of the court ruling.

Their detention at the police station was one of the toughest moments in their relationship, the couple said. They’ve been inseparable since they started dating in 2014, when protesters paralyzed major roads of the financial hub for 79 days late that year demanding full democracy for the city.

All Henry could think about was their wedding, just days away. “The scariest thing about the arrest was that I couldn’t get married on time. The police officers kept telling us that there was no plan to grant us bail,” he said. “The first thing I told my lawyer was to make sure we could be bailed out and get married.”

Once they secured bail and were finally out, they were overwhelmed by all the things they needed to handle – comforting their dogs; apologizing to their clients for canceling gym classes while they were being held; finding a suit for Henry to wear in court.

Waking up the morning after their release, they were nervous about appearing in court for the first time. And then they saw the scene outside the courthouse.

Even with a typhoon approaching the city and rain lashing down, hundreds of supporters had gathered outside Eastern Court, some of them covered only by plastic bags, to show solidarity.

Many held placards that read, “There are no rioters, only tyranny,” and kept chanting “Liberate Hong Kong, revolution of our time,” until all 44 people who appeared in court that day were granted bail in the afternoon.

Henry and Elaine didn’t know all of the people who had gathered to support them, and many of the supporters didn’t know them.

“It had nothing to do with them, but they stayed put and waited for us under the tropical rainstorm,” Henry said, wiping tears away. “The scene really overwhelmed us. We stopped feeling nervous by the time we entered the court.”