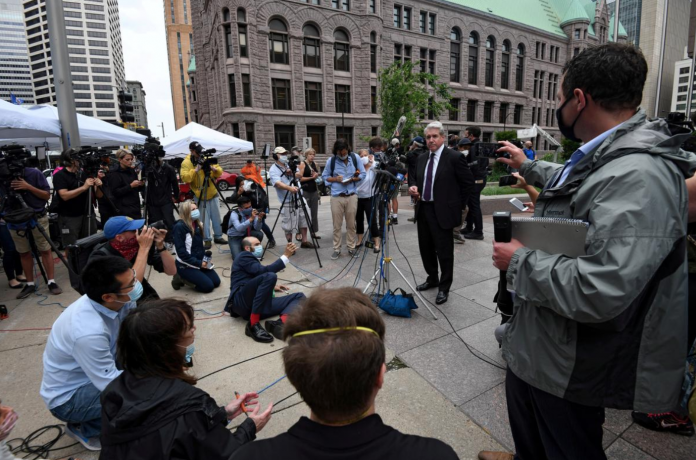 A Minneapolis judge will hold a hearing on Tuesday to consider a request from media outlets and defense lawyers to relax a gag order in the case against four officers accused of killing George Floyd, which launched a global anti-racism movement.

One of the former officers, Derek Chauvin, 44, pinned his knee into Floyd’s neck on May 25 when he and the three other former policemen were arresting Floyd in a Minneapolis neighborhood. Floyd was later pronounced dead at a hospital.

The incident, caught on video by bystanders, sparked massive and continuing protests against racial injustice and calls for police reforms.

Several local news organizations, along with CNN, CBS and the New York Times Co, are arguing that the order intrudes on their constitutional free speech rights.

The gag order restricts not only an “incredibly broad array of speech by the parties and their lawyers, but also subjects a staggering number of individuals not involved in these prosecutions to the same restrictions,” the organizations said in a court document.

Chauvin is charged with second-degree murder. J. Alexander Kueng, Tou Thao and Thomas Lane, the three other former officers, are charged with aiding and abetting in the case.

Attorneys for the four men also filed objections to the gag order, arguing it is depriving their clients of their right to free speech. They argued that restricting the media from viewing videos and other records of the incident can cause the public to have a one-sided view of the case that could benefit the prosecution.