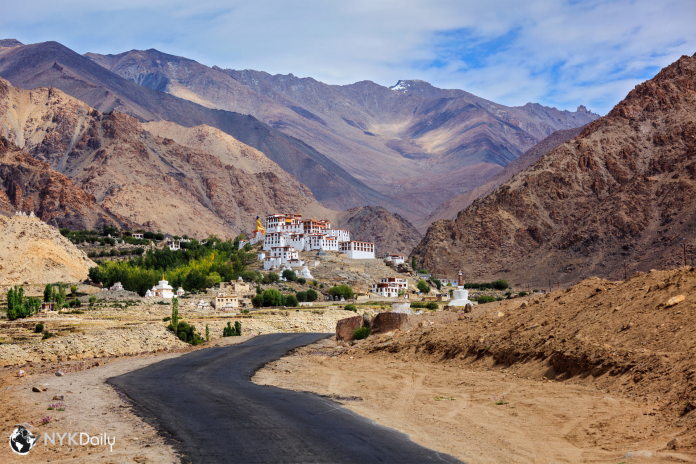 Ladakh, a South Asian wonder, is located in the Western Himalayas of Northern India. The Tibet Autonomous Region borders it to the east, the Indian state of Himachal Pradesh to the south, and the Indian union territory of Jammu and Kashmir to the west.

Ladakh is one of the most beautiful areas of India. It is an incredible blend of biting winds and burning hot sun, a cold desert in the wet umbrella of the awe-inspiring Great Himalayas. Globetrotters get hypnotized by the red surroundings of the place magnified with dark valleys, towering mountain ranges and fascinating panoramas.

Leh is the most populous town located in Ladakh and is known as the ‘land of high passes,’ where you will find some of the best landscapes on this earth. The area is full of tourists’ pleasures with spectacular beauty, Buddhist monasteries, vibrant culture & tradition, adventure sports, trekking, classical monuments & places, dense green fertile fields at a stretch backed by rough red mountains, glistening streams and currents. The area is rightfully described as the Land like No Other.

Leh hosts the spirit of Buddhism, where you can correlate with your inner self, peace, harmony, and the heart of Buddhism. The monasteries in the region are the treasuries of Buddhist influential culture and faith. Hemis Monastery, Shey Gompa, Sankar Gompa, Thiksey Monastery, and Spituk Gompa are some prominent monasteries.

Ladakh is famous for its’ geological features, climatic conditions and high ranges of towering mountains that lure adventure enthusiasts to indulge in enthralling sports. This place boasts of a string of adrenaline-pumping games.

The overwhelming and breathtaking sports here are exceptional. People can go for white water river rafting, archery, polo, camel riding, cycling, and archery under the supervision of the experts. The place is precisely the fantasy place for trekking. Trekking on the breathtaking tracks is such a fun-loving activity.

In this region, there are many heartstopping destinations including the Stock Palace Museum, Leh Palace, and many low-roofed houses. During the visit, the tourists can also enjoy gorgeous frozen rivers, snow-clad peaks, and high passes. Tsokar, Tso-Moriri, and Pangong Tso Lakes are the most arresting elements of the region.

The cultural entourage of Ladakh mirrors in its mosaic fairs and festivals. Don’t miss participating in the bright Hindu-Buddhist festivals, including Sindhu Darshan, Ladakh festival, Hemis festival, and Losar festival. All these celebrations are carried out with great glory, show and gripping dramas, along with dances on classical music.

There are many outdoor markets in Ladakh where tourists have the pleasure of buying all kinds of stuff. One can spend hours in the market. The popular items here includes pashmina wool cloths, hand-woven carpets, wall hangings, rugs, and jewelry.

Last but not the least, there is much more to explore in terms of delicious meals. Chhupri, Butter Tea, Qahwa, Thukpa, steamed dumplings stuffed with vegetables or meat are the main items of Ladakh cuisine. Some famous restaurants offer international cuisine as well – Italian, Chinese, Continental, Israeli.

So be ready to relish the post-covid19 vacation at Ladakh.