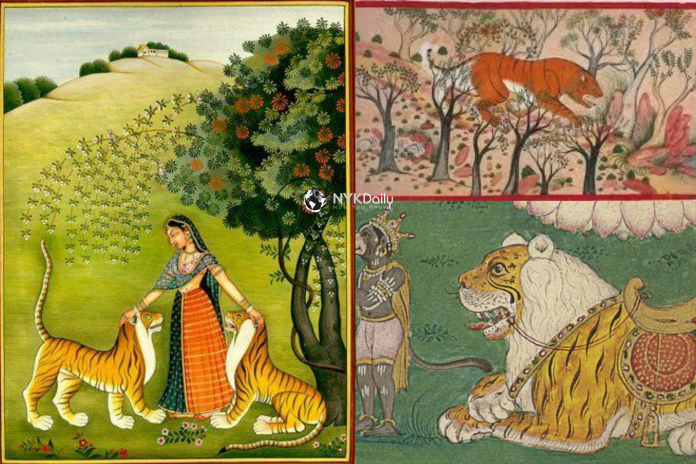 The International Tiger Day is an annual event on 29th July which was established at the St Petersberg Tiger Summit in 2010 – to create awareness on the alarming decline in the population of tigers all around the world. The event also aims to create a system for conservation of natural habitats of these majestic beasts and to gather support for their care.

Local events are organized not only in countries where the Tiger population is prevalent such as India, Bangladesh and Nepal but also in countries that do not fall under the range of Tigers such as England and the United States of America. Corporate companies and celebrities come together to extend their support to the cause financially and through several movements. The World Wide Fund for Nature (WWF) also hosts campaigns through investing in rangers.

When the evolution of Tigers was studied, the tiger’s closest living relatives were previously thought to be the Panthera species of lion, leopard and jaguar. But, a genetic analysis later indicated that about 2.88 million years ago, the tiger and the snow leopard lineages diverged from the other Panthera species and that the lion is closer in relation to the snow leopard than to the lion, leopard and jaguar. The tiger–snow leopard lineage dispersed in Southeast Asia during the Miocene. The origin of the Panthera is touted to be in northern Central Asia or the Holarctic region.

India is home to the largest population of tigers in the world, constituting over 70% of their global population. This is not only due to the science behind evolution and their adaptation to habitats but also due to massive efforts by the government and other organisations that have been looking after these beautiful creatures. The population has been on a steady rise from 2006 to 2018, as per the data available.

In India, the Sanskrit word for Tiger was Vyagrha. Today, it is more commonly known as Baagh or Sher. The tiger is one of the animals on the Pashupati seal belonging to the Indus Valley Civilisation. The powerful Chola Dynasty in India also used the Tiger as their emblem and engraved it on their coins, seals as well as banners. Several Chola copper coins have the tiger on their seal which indicated political supremacy over the fish emblem used by Pandya Dynasty and the bow emblem used by the Chera Dynasty. Excavation in a place called Kavilayadavalli in the southern state of Andhra Pradesh revealed gold coins that have motifs of the tiger and bow amidst other marks. Later, the Tamil Independence Movement and the unrecognised state of Tamil Eelam adopted the tiger symbol of the Chola Empire. It was also used by a lot of countries for their heraldry, as a sign of strength during war. In Hinduism, the mighty God Shiva wears a tiger skin as apparel and also sits on it. He is not only known as the supreme Lord or the one who creates, protects and transforms the universe – but he is also known as the protector of animals. The warrior Goddess Durga always rides a tiger/lion into battle and is incomplete without her position atop the animal. In southern India the God Ayyappan was associated with a tiger.

The word for Tiger in Chinese is Bái Hǔ. In Chinese culture, the tiger is one of the 12 animals of the Chinese zodiac. In Chinese art, the tiger is depicted as a symbol of the Earth element and a rival of the Dragon. It is said that the two mighty creatures were considered to be equals and while one represented matter, the other represented spirit. Hung Ga, the Southern Chinese martial art revolves around the movement of a tiger and a crane. Imperial China symbolised the tiger, dragon and phoenix. A tiger depicted war and represented the highest army general and the dragon and phoenix represented the emperor and empress respectively. The Chinese constellations has Four Symbols and the White Tiger is one of them. In some areas it also represents the west and the autumn season. The Manchu people in China considered the Siberian tiger as the king and called it Hu Lin.

In Korean culture, the tiger is depicted as a protector and guardian that keeps evil spirits away. It represents courage and absolute power and is considered to be a sacred animal that brings good fortune. In the forests of Korea, the Tiger is given the status of King of Mountain Animals and regarded as a Mountain Spirit. So, tigers were called San Gun which means Mountain Lord.

The Tungusic people of Siberia and Northeast Asia considered the Siberian tiger to be a deity and often spoke of it as a “Grandfather”. The Udege and Nanai people of Russia called it “Amba“. Surprisingly, the word Amba traces back to India to the Goddess of War, Durga – who is affectionately called as Amba in chants and hymns. She rides a Tiger/Lion and no image of hers is portrayed without her sitting on the mighty Tiger/Lion. She represents Dharma (duty) and the power of good over evil by combating demonic forces that threaten peace and prosperity. This is an example of how Vedic culture was prevalent all over ancient India which extended up to Russia. Even today, there are a lot of Russians who have adopted Hinduism and Sanatan Dharma owing to striking similarities in their ways of life. This is only one among the many examples of the influence of Indian culture and heritage on other Asian and European countries.

In Greco-Roman tradition, the God Dionysus was shown to be riding a tiger. Dionysus was the ancient Greek God of wine, fertility, theatre and religious ecstasy.

The tyger was a depiction of tigers as understood and portrayed by European artists. It was a very big part of European heraldry when it came to warfare and power symbolism. This creature has notable differences from actual tigers such as the absence of stripes, the presence of a leonine tufted tail, and a head with large pointed jaws. A more realistic version of the image came upon the armory symbols only after the British Empire’s colonisation of several countries of Asia, including India, and was given the name “Bengal Tiger” to distinguish it from the older version. The Bengal Tiger symbol came into existence when the British established the East India Company in the state of West Bengal in India, which was the start of a 300 year colonial rule. The iconography persisted and during the Indian Rebellion of 1857, Punch, a British magazine ran a political cartoon showing the Indian rebels as a tiger, attacking a victim and being defeated by the British forces shown by a larger figure of a lion.

India has 16% of the world’s human and cattle population in the world with only 2.5% of the world’s land mass and 4% of fresh rain water resources to sustain it. Despite the constraints on both natural and financial resources, 8% of the world’s biodiversity is present in India. This speaks volumes about the importance the country gives to Nature and corroborates the culture of worshipping nature that has been passed on to generations since the ancient times. Indian culture emphasises on nature being an irreplaceable part of the cycle of life, that human beings depend on, along with striving to thrive in coexistence.

The population of tigers in India has increased to 2,967 in 2018 from 2,226 in 2014, according to the tiger census. Today, India has 50 tiger reserves spread over 72,000 sq km. A Digital India programme for Smart Patrolling Protocol of Tigers, Monitoring System for Tiger’s Intensive Protection and Ecological Status (MSTrIPES) has also been started by the government. This has been released on the Android platform and is applicable to all the 50 tiger reserves. India is now focusing on the presence of tigers in the high altitude landscapes. Several poaching rackets have been busted. India has held capacity building workshops for field officers from Bhutan, Malaysia, Bangladesh, Cambodia and Thailand. Tiger reintroduction programmes have been discussed with Russia and Cambodia. Many tiger countries have done field visits to the tiger reserves in India. Bangladesh and India released a joint report on the status of tigers in the Sunderbans Delta. Recently, India’s latest Tiger Census was included in the Guinness World  Records for having laid over 25,000 camera traps and capturing more than 35 million pictures. They were scanned with the help of Artificial Intelligence. This was the largest counting exercise ever taken up by any country in the world.