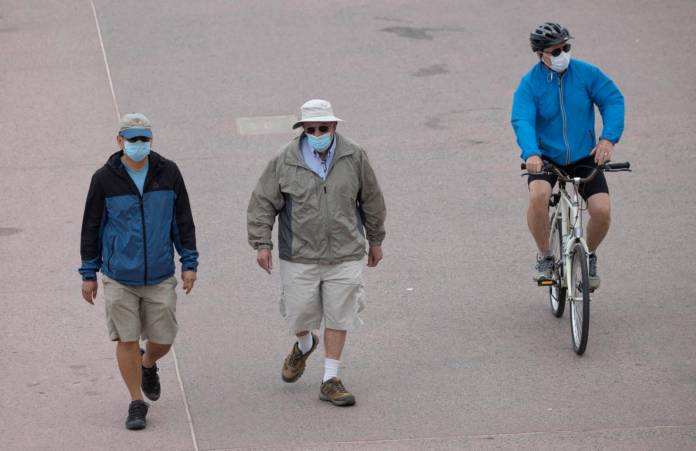 New coronavirus cases soared in California over the July Fourth weekend, stressing some hospital systems and leading to the temporary closure of the state capitol building in Sacramento for deep cleaning, officials said on Monday.

The number of people hospitalized with COVID-19 has increased by 50% over the past two weeks to about 5,800, Governor Gavin Newsom said at a briefing.

About a third of those hospitalized were in Los Angeles County, state and local records showed, with about 630 confirmed and suspected coronavirus patients requiring intensive care.

And 25% of the hospitalizations in the county in July were among patients aged 18 to 40, health officials said, as new cases increasingly hit a younger population that may have been lax about safety precautions in recent weeks.

Farther north, nearly 1,400 inmates at San Quentin State Prison have been sickened by the virus, putting pressure on hospitals in Marin County, where the facility is located, Newsom said.

Determined to slow the spread of the disease over the holiday weekend, state alcohol regulators visited nearly 6,000 bars and restaurants to make sure they were complying with new rules banning indoor dining and closing bars that do not serve food, Newsom said.

Nearly half a million businesses were contacted by the state over the weekend and warned that failing to enforce social distancing guidelines, including a statewide mandate to wear face coverings, could lead to a citation, he said.

The virus also reached into the halls of government.

On Monday, Assemblywoman Autumn Burke, a Democrat from Los Angeles County, posted on Twitter that she and her daughter had tested positive for the virus after what state human resources representatives called a “mask-to-mask” transmission.

Lawmakers have been meeting in person at the state Capitol building in Sacramento since mid-May.

Burke did not immediately respond to a request for comment, but a spokeswoman for state Assembly Speaker Anthony Rendon said the building had been closed for a deep cleaning out of concern for “the health and safety of the Capitol community.”

Five people who worked at the capitol had been infected with the virus, spokeswoman Katie Talbot said.